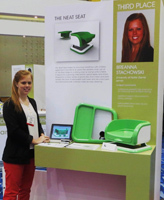 Notre Dame senior Breanna Stachowski recently placed third at the International Housewares Association (IHA) Student Design Competition, which recognizes excellent industrial design in the housewares industry and provides a venue for the winners to network and sell their finished products.

Stachowski, an industrial design and mechanical engineering major, received her award in March at the IHA show in Chicago. “I was able to speak with a lot of sellers and buyers, some designers also,” Stachowski says. “It was good just to meet such a variety of people throughout the show.”

Her winning design, a versatile high chair for infants called the NeatSeat, focused on easy cleaning and adjustability. It was a project for Assistant Professor Ann-Marie Conrado’s Advanced Product Design class. 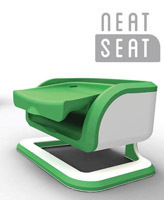 Stachowski, who also won an honorable mention in last year’s competition, says her latest design was inspired both by her engineering internship with Fisher Price last summer and her own family life.

“Interning at Fisher Price gave me a good sense of how big the market was for these products,” she says. “I’m also from a big family. I have six younger siblings, one older one. I just grew up surrounded by baby products.”

Stachowski received a sponsorship from Global Consumer Design to help build the prototype, which cost approximately $12,000. Throughout the process of researching, designing, and creating her prototype, she sought guidance from several Notre Dame professors.

“Professor Conrado helped me a ton,” Stachowski says. “I probably wouldn’t have gotten as far as I did without her pushing me a little harder each week. It was great to get her feedback.

“She has younger kids, so she let me come to her house and take pictures of her kids eating,” she recalls. “She also connected me with some other moms she knew so I could interview them, too.”

Sunoh Choe, another senior industrial design major in the College of Arts and Letters, won an honorable mention at this year’s competition for his hassle-free towel-rack extension and bathroom organizer. His design allows towels to dry in a smaller amount of space.

“I’m very grateful and surprised,” Choe says. “I didn’t think I was going to receive any recognition when I submitted my entry. I knew it would be a great portfolio piece, but wasn’t expecting to win anything with it.” 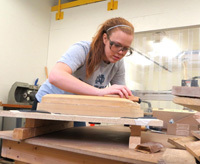 To work on their projects, both Choe and Stachowski stayed on campus the week after finals during the fall semester.

“It was awesome in the sense that we could bounce ideas off each other,” Stachowski says. “We have a very interactive community in the design major—design is a lot about getting other people’s feedback and opinions.

“We all have our different strengths and weaknesses, so it’s great to collaborate.”

Stachowski and Choe’s awards are the latest in a string of successes for the design program in the Department of Art, Art History, and Design. Notre Dame students have won the Industrial Designers Society of America’s (IDSA) Midwest District competition five of the last six years. The winner of this competition is honored at the IDSA annual conference as one of the top five graduating designers in the country.

Stachowski credits this sustained level of student achievement to the quality of professors in the program. “I think a lot of our success comes from the diversity of our faculty. Our professors have different strengths, so if you need help with some aspect of a project, there’s an expert professor you can go to for advice.”

“The students are pretty close, too,” she adds. “It’s small enough and close enough that we’re really good at asking for each other’s feedback and working with each other. It’s not competitive in the sense that we can’t help each other out. We’re willing to help each other improve.”