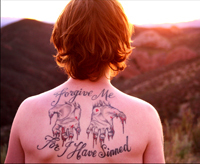 The University of Notre Dame’s annual ScreenPeace Film Festival will kick off with a powerful film about post-traumatic stress disorder (PTSD) among Iraq and Afghanistan war veterans.

On the Bridge, directed by College of Arts and Letters faculty member Olivier Morel, explores the impact of PTSD on former soldiers as they adapt to life outside of combat. The film begins at 7 p.m. on February 2 (Thursday) in the Browning Cinema of Notre Dame’s DeBartolo Performing Arts Center. Morel will introduce the film and lead the post-screening discussion.

Sponsored annually by the Kroc Institute for International Peace Studies, ScreenPeace offers critically acclaimed films that illuminate the impact of violent conflict and the challenges of peacebuilding. The screenings also provide opportunities for discussion with film producers, directors and Notre Dame faculty experts.

All films are free, but ticketed. Call the DeBartolo Performing Arts Center ticket office at 574-631-2800 to reserve tickets, order online at performingarts.nd.edu, or pick them up at the box office.

Other films in the series include:

Rebirth (6:30 p.m., Friday, February 3) follows the transformation of five people whose lives were forever altered on September 11, 2001, providing a moving portrait of how trauma and grief evolve into hope and rebuilding. Discussion led by field producer Danielle Beverly, who was a visiting assistant professor in the Department of Film, Television, and Theatre last year.

Nostalgia for the Light (9:30 p.m., Friday, February 3) takes us to Chile’s Atacama Desert, where astronomers examine distant galaxies and where surviving relatives of the disappeared search for the remains of their loved ones. Discussion led by Steve Reifenberg, executive director of the Kellogg Institute for International Studies.

Enemies of the People (6:30 p.m., Saturday, February 4) breaks a 30-year silence by focusing on the men and women who perpetrated the massacres in the killing fields of Cambodia. Discussion led by Sean O’Brien, assistant director of the Center for Civil and Human Rights at the Notre Dame Law School.

More information can be found on the Kroc Institute events page and at performingarts.nd.edu.

Originally published by Renée LaReau at newsinfo.nd.edu on January 11, 2012.