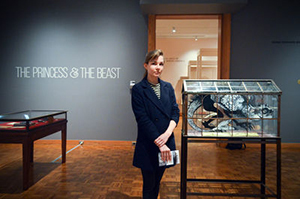 Sarah Edmands Martin, MFA candidate in graphic design, beside “Mishepishu Specimen” in her installation The Princess & The Beast.

Sarah Edmands Martin, a third-year graduate student in the Department of Art, Art History, and Design, received the Walter Beardsley Award from the Snite Museum of Art for her thesis installation The Princess & The Beast. Charles Loving, director of the Snite Museum, presented the award during the opening reception for the 2015 Thesis Exhibition on
April 10.

In his comments, Loving highlighted Martin’s scrutiny of history—the truth of its claims and its means of construction. “The Princess & The Beast juxtaposes folklore, fact, and falsehood, and the ways in which they underscore the mutability of time, perception, and physical reality,” noted Loving. “Most importantly, the project forces viewers to reconsider their understanding of Native American history within our community.”

The installation is comprised of the abstract and the concrete: stories and reminiscences, bones and books, posters and video. There are immediate take-aways (a bold image of a fish fin) and more subtle entries (a booklet).

“I was intentional about what levels of access people would have with this work,” said Martin. “A visitor’s age will affect how the work is perceived, as will a viewer’s background and how much time they have to spend with it. Children might be more drawn to the installation’s fantastic elements, while students and adults might engage more with its research components.”

The whimsical commingles with the dreadful in The Princess & The Beast. Immediately striking is Martin’s sculpture of the mishepishu (the beast), a half-lynx, half-fish cryptid believed by some members of the Pokagon band of the Potawatomi tribe and some residents of St. Joseph County to inhabit the waters of the St. Joseph River. Constructed of bones and wire, etched Plexiglass and ink, the creature is as layered as the voices that elsewhere in Martin’s installation recall the many legends about its existence.

To either side of the mishepishu sculpture, two velvet-lined vitrines (“A Case of Facts and Fictions”) hold curios evoking not only the mystery of the creature, but also the charged history of colonial and Native relations in the South Bend/Mishawaka area. The sundry objects on display include faux-daguerreotypes, a coppered snake molting, and a yellowed marriage certificate. Each artifact ties The Princess & The Beast to the history and geography of the community. A painting on the wall beside one of the vitrines depicts “Princess Mishawaka,” the fabled namesake of the nearby city. Other posters on the wall inform viewers of the federal government’s Indian Removal Act of 1830, and trace the act’s dire consequences for the Potawatomi in South Bend. Martin holding a transparency from her vitrine “A Case of Facts and Fictions, No. 2.”

“By couching my research in folklore, by situating it in a magical space, I think it makes people more willing to face these contentious issues, to discuss tough questions,” said Martin. “People are engaged by the spectacle of whimsy.”

“Ever since Sarah arrived on campus her work has been somewhat subversive, but in a good way,” commented Robert Sedlack, associate professor of visual communication design and Martin’s thesis adviser. “One of her earlier projects, titled Bad Things Happen, addressed the ‘Disneyfication’ of classic fairy tales. Most classic fairy tales were both scary and reinforced a serious message for children.”

Martin’s interest in fairytales and folklore guided her thesis creation. “I became interested in the stories of this [Notre Dame and South Bend]community, the stories we tell about the past—whether tales or history—and how these stories inform our present.” She hopes visitors to her show at the Snite will leave wanting to explore the places and names of the area and reconsider their own roles in the stories of their communities.

Martin’s installation, as well as the work of five other third-year graduate students from the Department of Art, Art History, and Design, will be on view through May 17.

Walter Beardsley was head of Miles Laboratories, Elkhart, manufacturer of such well-known products as Alka-Seltzer, Flintstone Vitamins, and Bactine. Beardsley gave the Snite Museum modern artworks such as the Georgia O’Keeffe painting that is on view within the Walter R. Beardsley Gallery. He also provided the Snite Museum with an endowment, which, among other activities, funds the Beardsley Award.