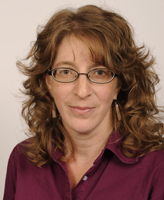 Gillespie, who serves as co-director of the University’s Program in Russian and East European Studies, says the award was both unexpected and thrilling. “Poetic translation is something I’ve done ever since I started learning Russian as an undergraduate … so to be recognized for it in this way is pretty special.”

This year’s contest, sponsored by Cardinal Points Literary Journal, commemorated the 125th anniversary of the birth of Gumilyov, an early 20th-century Russian poet who was executed by the Bolsheviks in 1921.

“It would be wonderful if these sorts of events would attract more English speakers to Russian poetry,” Gillespie says, “because it’s such a rich tradition.”

She describes “Giraffe” as an address to a melancholy lover couched in African imagery that Gumilyov gathered from his travels throughout the continent. Gillespie says she attempted to convey the beauty, mystery, and melody of “Giraffe” in her translation.

“For me, there’s no such thing as a translation that does not recreate the form, because the form is part of the substance of a poem,” she says. “You can’t just translate the meaning and not recreate the flow, the sound, the phrasing—all of that is part of what a poem is. It’s a performance art.”

Gillespie, who teaches in the University’s Department of German and Russian Languages and Literatures, is also currently working on two separate books about Alexander Pushkin. The first, an edited book called Taboo Pushkin: Topics, Texts, Interpretations, will be published in the University of Wisconsin Press Pushkin Series in spring 2012. The second book, a monograph, addresses Pushkin’s “role as a poet within an authoritarian society, the transgressions that being a poet necessitate, and the moral implications of those transgressions.”

The manuscript of Gillespie’s first book, A Russian Psyche: The Poetic Mind of Marina Tsvetaeva, was recently accepted for publication by a publishing house in St. Petersburg. “It will now reach a Russian audience, which is exciting,” she says.