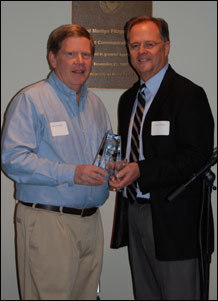 Robert P. Schmuhl, Walter H. Annenberg-Edmund P. Joyce Professor of American Studies and Journalism at Notre Dame, has been selected as the Media Legend of the Year by the University’s Office of News and Information.

Presented annually since 2004, the award recognizes a faculty member who consistently assists the news and information staff in bringing attention to the University’s academic excellence through media relations, the Web and other communications channels. It was presented Dec. 1 in the Notre Dame Stadium press box during a reception attended by some 125 faculty and staff.

“For many years, Bob has served as an expert resource for reporters seeking comment on the American political landscape and its relationship with the media,” said Dennis K. Brown, assistant vice president for news and information. “Numerous national and international media organizations repeatedly turn to Bob for his insights, and that was never truer than throughout this year’s presidential campaign. We are grateful for his willingness to help our staff accentuate the scholarship at Notre Dame.”

A member of the Notre Dame faculty since 1980, Schmuhl is the director of the University’s John W. Gallivan Program in Journalism, Ethics & Democracy. He is the author or editor of 10 books, including “Statecraft and Stagecraft: American Political Life in the Age of Personality,” “Demanding Democracy,” “Thomas Jefferson: America’s Philosopher-King,” and “Wounded Titans: American Presidents and the Perils of Power.”

Previous recipients of the Media Legend award are Lawrence Cunningham in theology, George Lopez from the Kroc Institute for International Peace Studies, Albert-Lszl Barabsi in physics and Joan Brennecke in chemical and biomolecular engineering.

Originally published by Julie Hail Flory at newsinfo.nd.edu on December 02, 2008.