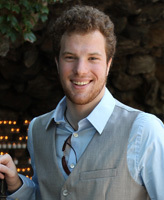 Alex Coccia, an Africana studies and peace studies major in Notre Dame’s College of Arts and Letters, has been named a 2013 Truman Scholar.

Nationwide, just 60 to 65 college juniors are selected as Truman scholars each year, based on leadership potential, intellectual ability, and likelihood of “making a difference.”

“It is such an honor to be named a 2013 Truman Scholar,” Coccia says. “I cannot thank enough my professors who have mentored me throughout my time at Notre Dame and the staff at the University’s Center for Undergraduate Scholarly Engagement (CUSE) whose thoughtful and critical guidance prepared me well for the Truman application and interview process.”

A native of Columbus, Ohio, Coccia is a scholar in the Glynn Family Honors Program and an active student-athlete. He was a member of Notre Dame’s 2011 National Championship fencing team and founded the 4 to 5 Movement, a student initiative in support of LGBTQ inclusion on campus. He was recently elected student body president for the 2013-2014 term.

Coccia, who is also involved in the International Scholars Program in Notre Dame’s Kellogg Institute for International Studies, taught fencing to schoolchildren in Uganda in summer 2011, and spent summer 2012 conducting research in Rwanda. He plans to draw on that research for a senior thesis on the Gacaca Court System in Rwanda.

“The courts were set up after the genocide in an effort to be sort of a transitional justice, a restorative justice model,” Coccia says. “My question is: Has this focus on reconciliation had an effect on the actual development of communities? And what is the relationship between reconciliation and development in post conflict societies?”

Looking to the future, he says he is interested in politics and human rights law.

“I’ve always been interested in law as the system in which society operates, and I think having that background is important when we’re dealing with structural injustices.”

Coccia is the fourth Notre Dame College of Arts and Letters student to be named a Truman Scholar in as many years. Past winners include Elizabeth Davis ’12, a Program of Liberal Studies major; Elizabeth Simpson ’11, a theology and peace studies major; and Puja Parikh ’11, a political science and psychology major.

Among the program’s many benefits is a Truman Scholars Leadership Week, which Coccia says was a fantastic experience.

“I had the opportunity to spend time with 61 other passionate and dedicated student leaders,” he says. “Their commitment to public service, whether through public office, medicine, nonprofit development work, or other areas of interest, is truly inspiring.

“I’m certainly humbled to have received the scholarship and am looking forward to using it to further my education in an effort to live out the mission of both the University and the Truman Foundation—in service to justice.”