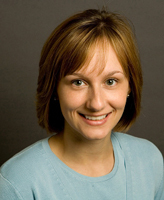 In recognition of her distinguished body of scholarship, University of Notre Dame’s Nicole McNeil has received the 2013 Boyd McCandless Award from the American Psychological Association (APA).

“Past winners of this award are a veritable ‘who’s who’ of developmental science,” says Daniel Lapsley, chair of the Department of Psychology and Alliance for Catholic Education Collegiate Professor of Psychology. “Nicole is keeping very impressive company, and we are proud of her accomplishments.”

McNeil, Alliance for Catholic Education Associate Professor of Psychology, focuses her research on the development of mathematical thinking in various forms. Over the past several years, she has received more than $2 million in funding from the Institute of Education Sciences and the National Science Foundation to continue her research. She also oversees several related, student-led projects.

“Still other studies focus on the malleability of children’s early mathematical concepts and skills, with the goal of identifying the best ways for parents and teachers to structure children’s environments to help them construct an understanding of important math concepts.”

The Boyd McCandless Award is given annually to someone who has made a “distinguished contribution” to the field of developmental psychology, the dissemination of developmental science, or has conducted programmatic research of distinction. What McNeil finds most rewarding about receiving the award, she says, is that it is based on a scholar’s entire body of work to date, rather than just a singular achievement.

“Thus, I think the award speaks to the selection committee’s recognition of the quality and importance of my research to date,” she says, “as well as their confidence in the enduring impact of my work. … It’s an amazing honor to receive the award. It’s still kind of unbelievable to me.”

As the 2013 Boyd McCandless Award recipient, McNeil will give a talk at the APA’s next annual meeting in Hawaii. She will also head the committee to select the following year’s winner.

“I can’t believe I’ve achieved enough to be included with such an illustrious group of people,” she says. “It certainly is motivating, though. I can only hope that I will be as good of a representative of the award as the previous winners have been.”