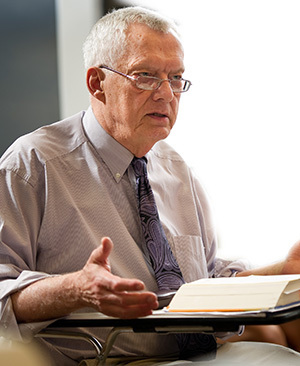 John Sitter, the Mary Lee Duda Professor of Literature in Notre Dame’s College of Arts and Letters, was presented with the 2014 Sheedy Excellence in Teaching Award on Tuesday, December 2.

The Sheedy award is the highest teaching honor in the College. It was founded in 1970 in honor of Rev. Charles E. Sheedy, C.S.C., who served as dean of Arts and Letters from 1951–69.

A renowned scholar of 18th-century poetry, Sitter does not “allow his own field to limit his intellectual interests,” said Valerie Sayers, professor and former chair of the Department of English.

“For several decades, John has also taught poetry, fiction, the essay, creative nonfiction, and television—from ancient times to the present,” she said. “We are particularly excited by his recent work in the fields of eco-criticism and sustainability studies.

“With his emphasis on ethics, virtue, and engagement in civil life, he is certainly a model for his students, as well as a model for all teacher-scholars.”

Sitter has written and edited numerous works on 18th-century literature, including The Cambridge Introduction to Eighteenth-Century Poetry, which was named an Outstanding Academic Title of 2011 by Choice magazine. His book Literary Loneliness in Eighteenth-Century England was awarded the Gottschalk Prize by the American Society for Eighteenth-Century Studies.

He is also editor of The Cambridge Companion to Eighteenth-Century Poetry and two volumes of The Dictionary of Literary Biography. Most recently, he has published articles on Samuel Johnson, climate change, and academic responsibility.

Sitter brings his research into the classroom through courses such as British Literary Traditions, where he “teaches with a contagious zeal that makes students excited to dive into the material,” said a sophomore English major who recommended Sitter for the Sheedy Award.

“He also pushed me to improve my writing, not settling for anything less than my best work,” the student wrote.

In turn, Sitter said that his students’ curiosity and ever-changing perspectives enliven his classroom discussions and enrich his research.

“I find that every year, there are students seeing things in the texts that I have not seen before—even with works like Gulliver’s Travels which I must have taught 40 or 50 times.”

Sitter also has a passion for teaching satire, which he said “comes naturally to someone who works in the 18th century,” a period filled with notable satirists.

One of his longtime favorite courses is titled Satire: Jonathan Swift to Jon Stewart and focuses on great moments in English and American satire through the centuries.

“Including Stewart and Colbert is a lot of fun, but it’s also important for me because I want students to understand the continuity. They realize that Colbert’s techniques are those of Swift—to see that across the centuries makes important connections.”

In 2011, Sitter became involved in the development of a new interdisciplinary minor in sustainability studies, housed in the College of Science and open to students across the University.

His decision to focus on sustainability, Sitter said, was born of a personal interest in the environment as well as courses he had taught on literature and nature.

“So much literature is dependent on natural imagery and the changing depictions of nature are very interesting—whether it seems chaotic or orderly, dangerous or nurturing,” he said.

Sitter, who is also a fellow in the John J. Reilly Center for Science, Technology, and Values, is on the advisory committee for the minor and has helped team teach the introductory course several times—with colleagues in science, sociology, theology, and engineering.

“It has been a steep learning curve and a really exciting one,” he said. “I think the gateway course is a good model for students because they see professors from very different fields grappling with common issues and working outside our comfort zones. None of us was trained in sustainability.

“I hope that it models a kind of intellectual seriousness and shows that you don’t have to have a particular degree in something to want to learn about it and approach it critically and thoughtfully.”

Sitter has become a campus leader in sustainability instruction, said Jessica Hellmann, associate professor in the Department of Biological Sciences. “John’s contributions are widely known among students, faculty colleagues, and administrators. Without John’s leadership, this new dimension of the undergraduate curriculum would not have been possible.

“I am extremely impressed with how deeply he engages the intersection of literature and science on sustainability,” she said. “He is often the first to alert me about some new study that has come out on climate in the leading science journals, for example, and he is a widely and deeply read scholar on sustainability topics.”

In addition to the enthusiastic support of the Department of English, Sitter received letters of support for his Sheedy Award nomination from colleagues and students in biology, sociology, chemistry, marketing, and anthropology.

“John is a superb teacher and scholar,” said Anthony Serianni, professor in the Department of Chemistry and Biochemistry who has taught the sustainability course with Sitter. “His communication style in the classroom is exceptional—thoughtful, deliberative, and penetrating. He has a deep-seated interdisciplinary spirit and a tolerance for different ways of thinking, so long as it is rigorous.”

“It means a great deal to me, this kind of validation. There are a lot of good teachers everywhere, but there are so many excellent teachers at Notre Dame. I feel lucky to have been chosen when many others could have been.”

“Over 50 years ago, John graduated from La Salle High, a school for 200 boys in the mountains of western Maryland,” Molyneaux said. “The size of the school bred a Renaissance-man spirit among the students, and for his peers, John was the point man of the movement: the class president who played football and basketball, edited the school paper, and performed on stage. Even at that age, a lover of literature and of wit, John had his sights set of scholarship.

“The gravitational pull of literature has since led him to the highest level and quality of scholarly writing. I am grateful to have seen the first steps of his intellectual journey and to celebrate now the rich legacy of research and teaching that John has given his students, colleagues, and readers.”

When Sitter looks at the course of his career and his range of diverse interests, one surprising connection emerges—the idea of posterity.

“It is something that seemed to come fairly naturally to many people in the 18th century,” he said, “but we have a tough time with it. This idea of being judged by posterity or making a contribution to posterity seems to have disappeared from our civic discourse, and that contrast interests me. We need to recapture some of that. That’s part of what my research is about and it has the potential to bridge my two areas of interest.”

The current environmental crisis is severe, Sitter said, and is something we must all face together, no matter what discipline we study.

“It is important to think about how our different areas of knowledge complement each other and to understand that many of our most serious problems are not well behaved and do not stay within our disciplinary lines. They take all of our resources to address.

“We are at an absolutely critical juncture. So for me it’s extremely important that we graduate students who are going to become citizens and leaders who have a real grasp of their situation because the effects are going to be greatest for them and their children.”

Sitter has high expectations for Notre Dame students and believes that the critical thinking and communication skills they hone through Arts and Letters courses will serve them well in considering environmental threats.