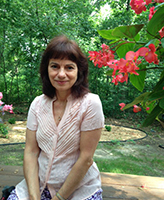 As a disability scholar, Juarez examines “the intersection of physical and mental human limitation and social exclusion.” She is currently working on a book called Disabled Bodies in Early Modern Spanish Literature: Prostitutes, Aging Women, and Saints.

The Paradigm of Disability

“The purpose is to examine the concepts and role of women in Spanish discourses and texts from the end of the 15th to the 17th century,” she says. “My approach assumes that traditional notions and segregation of female bodies, considered imperfect and inferior in opposition to the norm of the corporeal male, constitute the paradigm of disability in the period.

“The female body, as well as the disabled, has been stigmatized, subjugated, and deprived of freedom and opportunities. In the Western conceptualization, women and disabled symbolize imperfection, corruption, and impurity. The book explores Spanish discourses to show how they inherit, reproduce, and propagate Western traditional concepts of the female embodiment. It also examines the representation of deviant female characters in a variety of literary texts.”

As member of two Modern Language Association committees on disability studies, Juárez-Almendros has promoted this approach in both pre-industrial literature and Hispanic criticism, creating panels, suggesting new members for the committees and mentoring younger scholars in the field. She has also been involved in the Disability Studies Forum at the University of Notre Dame.

In addition, Juarez recently edited, coordinated, and wrote an introduction to a forthcoming cluster of articles entitled Disability Studies in the Hispanic World for the Arizona Journal of Hispanic Cultural Studies.

Beyond the Traditional Canon

In her teaching, Juárez-Almendros delves deeply into the writings of Francisco de Quevedo and Miguel de Cervantes, who, along with the poet Luis de Góngora, are considered the canonical triad in Spanish classical literature.

“Both writers offer complementary visions of a complex society during a moment in which the Spanish empire shows clear signs of crisis,” she says. “Artistically they raised the Spanish language and literature to the highest standards.”

“My academic training both at the University of Barcelona and at the University of California, Berkeley, did not include the study of early-modern women authors,” she says. “The majority of 20th-century literary scholars were also males and uninterested in female writing. For the last few decades, the development of feminist theory and the increase of female Hispanists commenced the awareness, rescue, and study of neglected female writers of the period.”

Connecting with the Past

For her students, Juárez-Almendros presents these varied artistic texts in their cultural and historical context but also emphasizes “the continuity and evolvement of certain topics, motifs and genres, and the impact that many of the beliefs and cultural issues in the past still have in our present time.”

“The objective,” she says, “is to make students connect to literary texts that seem very far-removed from their experiences.”

Juarez says she appreciates the quality and seriousness of the students she encounters in Notre Dame’s College of Arts and Letters—both undergraduate and graduate.

“They always bring fresh ideas and enthusiasm to the reading of texts,” she says. “I consider graduate students the new generation of scholars and I feel very honored to have the chance to guide them in their professional learning.”