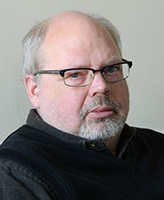 Whether we’re driving down the highway, scrolling our Facebook newsfeeds, or flipping through television channels, various forms of animation bombard us constantly.

“Even if you don’t watch television, you see these images on your phone, your iPad, even billboards when you drive down the road,” says Donald Crafton, the Joseph and Elizabeth Robbie Professor of Film, Television, and Theatre at Notre Dame.

“Our lives are experiencing an era of convergence. Technologies are converging and fighting it out in all forums. It raises a lot of interesting questions for animation.”

Crafton, who recently finished a year as the interim director of the University’s Nanovic Institute for European Studies, takes on these questions in his expansive new book, Shadow of a Mouse: Performance, Belief, and World-Making. The book, published by the University of California Press, explores animation through various lenses and time periods with the idea that performance has guided both the creation and the reception of cartoons since their inception.

Anyone who has ever held their breath at the antics of the Road Runner or laughed at Betty Boop understands the power and vivacity of these hand-drawn characters. The audience believes in their liveness even as they laugh at their ludicrous proportions. This, says Crafton, is the magic and enigma of cartoons.

“Animation is a kind of performance art similar to normal movies but with its own set of technologies, artistic conventions, and audience expectations that set it apart,” he says. “I make a case that cartoon actors have the same status on the screen as human actors.”

Even outside the individual characters, the cartoon as a whole creates a world and an experience, he says. “Cartoons are performances in the same sense as other kinds of artistic performances—symphonies or orchestras or poetry readings.” 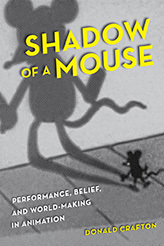 Shadow of a Mouse grew out of a series of freestanding essays Crafton started composing 10 years ago. “Probably when it was 80 percent complete I had six chapters and I started to see the thread of performance giving it coherence and an argument with claims and proofs and hypotheses and conclusions,” he says.

He then began rewriting the book with this new slant. Using an interdisciplinary approach, Crafton pulls on material from archives, memoirs, thousands of hours of cartoons—even philosophical and theological writing.

“I use a variety of techniques to try to answer these questions,” he says. “Part of it is formal analysis of the films, looking at the techniques and the results. Part of it explores philosophical approaches to perception and our understanding of reality.”

As a result, Crafton says, Shadow of a Mouse “is more theoretical than my other books,” a prospect he found exciting. “It was never a chore. It was never an anvil around my neck.”

Crafton has enthusiastically pulled his research into the classroom at Notre Dame with a new course he designed, called Animation Cinema: History and Theory. The survey class—first offered during the spring 2013 semester—provides a wide historical background for animation and allows Crafton to work closely with his students as they study everything from hand-drawn cartoons to Japanese anime to computer graphics.

“This is a small course, which means that it allows for a lot of personal, up-close interaction,” Crafton says. The class, which expands on the material in his book, encourages students to seriously interrogate cultural assumptions.

“It raises questions about philosophy of entertainment, representation, and the relation of media to society,” he says. “It’s the kind of thing that undergraduates can really sink their teeth into and argue about and get excited about. If we’re talking about Disney princesses, we’ll talk about gender and gender identity. When we talk about race in classic cartoons this summer’s headlines will become part of the discussion.”

In addition to the animation class, Crafton teaches graduate courses and a film history course, as well as the occasional College Seminar. “Notre Dame students are inquisitive, open-minded, and very tolerant, but they like to argue and debate,” says Crafton.

“One of my favorite quotes is by Father Hesburgh: ‘The University is where the church does its thinking,’” says Crafton. “I think all our classes are small expressions of that idea.”