Luis Ricardo Fraga, a heralded scholar and pioneer in the field of Latino politics, joined the faculty of Notre Dame’s College of Arts and Letters this fall.

Fraga has been named the Professor in Transformative Latino Leadership in the Institute of Latino Studies (ILS) and a professor in the Department of Political Science.

“The appointment of Luis Fraga represents the high point of my career,” said ILS Director José Limón, the Julian Samora Professor of Latino Studies. “He will take us to a wholly new threshold in Latino Studies. We could not be more pleased with this invaluable scholarly and intellectual addition.”

“Luis Fraga is one of the most distinguished American political scientists working on the increasingly central issue of the role of Latinos in American politics,” said Michael Desch, professor and chair of the Department of Political Science.

“Not only is this the next big frontier for our discipline, but it also directly connects with Notre Dame’s mission to be the place where the Church examines how the parallel growth in the number of Latinos in our pews will shape Catholicism in the 21st Century.”

Fraga has contributed greatly to the national discussion about problems facing the Latino communities.

His most recent work, Latinos in the New Millennium: An Almanac of Opinion, Behavior, and Policy Preferences, draws on data from the groundbreaking 2006 Latino National Survey to create a comprehensive profile of Latino political life in the United States.

Fraga was one of six principal investigators of the survey—the largest and most detailed source of data on Hispanics in America. This study, he said, displays the complexity of Latinos, from recent immigrants to those whose grandparents were born in the United States.

He and his coauthors are now completing a new book titled Invisible No More: Latino Identities in American Politics, where they argue that Latinos see themselves in the U.S. as members of individual ethnic groups by country of origin, and as members of a pan-ethnic Latino community, and as Americans.

It is this reality of multiple identities, he said, that “presents the nation with a new way of understanding how difference and commonality can coincide to make the country even stronger as it continues to experience substantial demographic shifts.” 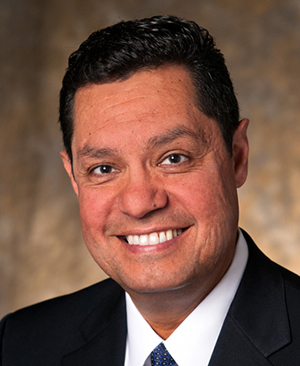 In 2011, Fraga was appointed to the President’s Advisory Commission on Educational Excellence for Hispanics, where he has helped to develop action plans to increase educational opportunities and improve the educational attainment of Latino students—who now comprise 25 percent of all students enrolled in public schools.

By engaging scholars, policy advocates, and education practitioners, the commission has worked to develop “evidence-driven, scalable, moveable” recommendations at the institutional, local, state, and national levels. A 2012 symposium led to 18 specific recommendations that have been reviewed and in some cases enacted by the White House and the Department of Education. The commission is working to finalize proposals from a second symposium held at the Roosevelt House in New York City earlier this year.

“What is important to understand is that we are pushing ourselves to not just talk, critique, or state what needs to be done, but rather to be smarter and more strategic to maximize our capacity to contribute constructively to the policy-making process,” Fraga said.

“We are, in essence, doing our best to give back to our communities as scholars and leaders.”

Fraga came to Notre Dame from the University of Washington where he was associate vice provost for faculty advancement, Russell F. Stark University Professor in the Department of Political Science, and director of the Diversity Research Institute.

During Fraga’s time in Washington, Archbishop Peter Sartain appointed him to the board of the Fulcrum Foundation, which provides financial support to families and schools within the Seattle Archdiocese.

“Their challenges are similar to those facing many other communities today,” Fraga said. “How do we build financially and programmatically sustainable models of Catholic education, grounded in the Gospel and fully consistent with the origins of Catholic education in the U.S., which are to provide opportunities to low-income, predominantly Catholic, immigrant communities?”

Fraga worked with Fulcrum and the Office for Catholic Schools to establish the first two-way immersion, Spanish-English language and culture elementary school in the archdiocese. By attracting sufficient numbers of tuition-paying families who want their children to become fully fluent in Spanish, the program, now in its third year, can become financially sustainable while providing superior educational opportunities for students from immigrant families.

“It is a win-win situation,” Fraga said. “This is another example of taking knowledge from our research and working hard to apply it to Catholic schools so that they can be both sustainable and inclusive at the same time.” He was named a Champion of Catholic Education by the Fulcrum Foundation in 2012 and was the first recipient of the Juan Diego Award from Holy Rosary Regional School in 2013.

At Notre Dame, Fraga said his charge as the Professor in Transformative Latino Leadership is to establish a program that will inform, challenge, and inspire the next generation of leaders who choose to serve as advocates on behalf of Latino communities.

“Without a doubt, that leadership will come, in part, from Latino community members themselves,” he said. “However, it will also come from all of us, regardless of ethnic and racial background, who are positioned to make decisions that will affect these communities.”

In spring 2015, Fraga will teach a course entitled Latinos in the Future of America: Building Transformative Leadership. Students in the course will have the opportunity to interact with invited leaders from business, arts, education, community organizing, entertainment, medicine, religion, law, politics, and other areas. There will also be a number of campus-wide events featuring these speakers.

“My classroom, I hope, is a safe place where all students can freely and fully explore their own capacities to be rich and fulfilled citizens in their communities today and tomorrow,” said Fraga, who has won 16 teaching, advising, and mentoring awards in his career. “A student once stated in an evaluation of my teaching that ‘he makes me think too hard.’ I know that I have done my best work when I have that type of impact.”

Whether contributing on the national policy stage, advocating for educational opportunities, writing, or teaching in the classroom, Fraga says his work is grounded in his Catholic faith and fully aligned with Notre Dame’s mission “to better humanity through faith, commitment, knowledge and caring.”

“I am blessed to be at a university where one can talk about normative conflicts, value inconsistencies, the need for self-reflection, and the love of one’s fellow human as part of one’s research, teaching, and service,” he said.

“Some institutions of higher education are uniquely positioned to ask the hard questions, work to find better informed answers, and empower faculty and students to know their consciences. Notre Dame is exactly such an institution.”