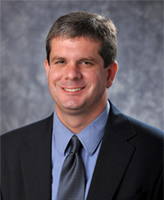 Bestowed by the Political Organizations and Parties section of the American Political Science Association (APSA), the award recognizes an article published within the past two years that has made a significant contribution to research and scholarship on political organizations and parties.

“It is always a great honor to be recognized by your peers,” Layman says, “and those on the award committee are people who are very well respected and whose work has been important to my own thinking on party politics.”

This year’s award-winning article, which Layman co-wrote with Thomas Carsey (University of North Carolina at Chapel Hill), John Green (University of Akron), Richard Herrera (Arizona State University), and Rosalyn Cooperman (University of Mary Washington), examines the recent growth of party polarization in American politics. Specifically, it addresses the conventional wisdom in political science that the two major parties only collide over one major issue at a time.

“As a new agenda emerges, and the parties grow more different from each other on that, it has been assumed that they tend to grow closer together on old issues,” Layman says.

“However, this has not happened over the last 30 to 40 years. New issues—first issues of race and civil rights in the 1960s, later cultural issues such as abortion and gay rights in the 1970s up to the present—have emerged, and the two parties have grown much more distinct on them. For example, there was virtually no difference between the parties’ stands on abortion in 1972, or even 1976, and now the parties could not be more different on the issue.”

In a series of articles, including this one, Layman and Carsey lay out reasons for this “conflict extension.”

“Political scientists have long assumed that the issue positions of political activists are set in stone. … But we use panel surveys (surveys of the same people at two or more points in time) of national convention delegates between 1992 and 2000 to show that it has occurred—and that it has driven Democratic and Republican activists further apart on cultural, economic, and racial issues.”

Layman, who also serves as director of graduate studies for Notre Dame’s Department of Political Science, specializes in political parties, elections, public opinion, and religion and politics in the United States.

He is currently working on two main projects. The first, with Carsey, is a book on conflict extension across the American political system, for which the two scholars are bringing together their research on the parties’ coalitions in the mass electorate and on party office holders and activists.

Layman’s other project is with David Campbell, a professor in Notre Dame’s political science department and director of the College’s Rooney Center for the Study of American Democracy, along with Professor John Green of the University of Akron. Supported by a grant from the National Science Foundation, they are researching the rise in secularism in the United States.

“We are examining the rapid growth in non-religion—or the percentage of Americans claiming to affiliate with no religion—over the last two decades,” Layman says. “We argue that this growth has been motivated, in part, by politics, and specifically, the growing ties between traditional religion on the one hand and political conservatism and the Republican Party on the other hand.

“People who do not share those political inclinations,” he says, “may have assessed that situation and decided that religion itself might not be for them.”

The three scholars will evaluate their argument with a four-wave panel survey of the American electorate, begun during the fall 2010 political campaign and finishing after this fall’s presidential campaign. They also have surveyed members of the American Humanist Association, an organization that explicitly rejects religion and its role in American public life.

In related news, the 2011 Jack Walker Outstanding Article Award went to Guillermo Trejo, who will be joining Notre Dame’s College of Arts and Letters this fall as an associate professor in the Department of Political Science.