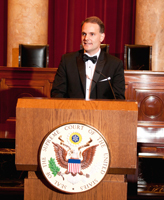 Derek A. Webb, who received his Ph.D. from Notre Dame’s Department of Political Science in 2008, was recently honored at the U.S. Supreme Court for his paper titled “The Original Meaning of Civility: Democratic Deliberation at the Philadelphia Constitutional Convention.”

Webb’s essay won the American Inn of Court’s prestigious 2012 Warren E. Burger Prize, named for the late Chief Justice and the founder and first president of the Supreme Court Historical Society. The award recognizes outstanding scholarship that “promotes the ideals of excellence, civility, ethics, and professionalism within the legal profession.” The honor includes publication of the paper in the South Carolina Law Review.

In this research, Webb examines the constitutional convention as a potential model for constructive dialogue using as a basis for argument the friendship among delegates at the convention, which was characterized by frequent interactions and camaraderie across party lines.

Upon their foundation of their friendships, Webb found, the delegates were able to reason together in a manner conducive to open-mindedness, rational deliberation, and incentives to compromise—even when economic and political interests divided the delegates.

Webb, who also holds a B.A. in philosophy from Yale and a J.D. from Georgetown University Law Center, is currently on a two-year fellowship at the Stanford University Constitutional Law Center. Prior to his fellowship, he served as a summer law clerk for the U.S. Court of Appeals for the Fifth Circuit and the U.S. Senate Judiciary Committee.

At Notre Dame, he focused his graduate studies and research on American political thought. He co-edited a book with his dissertation director, Nancy R. Dreux Professor of Political Science Michael Zuckert, on the constitutional ratification debates in New York and received two University-wide teaching awards.

“Getting my Ph.D. in political science at the University of Notre Dame before entering law helped lay the foundation for much that I am doing now,” Webb says. “The primary materials for the paper—James Madison’s notes on the Convention and the record of the subsequent, roiling year-long debate about the Constitution from 1787-1788—were things I first started to closely and seriously examine while at Notre Dame.

“Without that ‘deep background’ in the sources and the scholarly literature surrounding those sources—much of which I learned through my study and collaboration with Michael Zuckert—this project would likely not have come together in the way that it did,” he says. 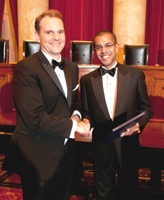 The American Inns of Court, whose mission is to foster excellence in professionalism, ethics, civility, and legal skills, presented Webb with the Burger Prize on October 20 in Washington, D.C.

“As I mentioned in my speech at the Supreme Court when I received the award, the Burger Prize really feels like the honor of a lifetime,” Webb says. “And giving a speech in the historic courtroom of the Supreme Court before such a distinguished group of judges, lawyers, and law professors was an amazing—almost unreal—experience that I will never forget.”