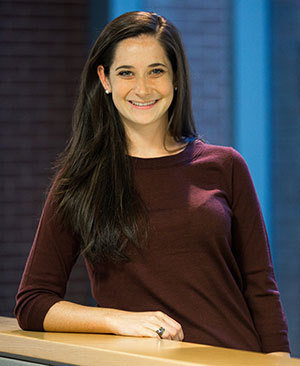 Before the rigors of post-college life set in—before mortgages, family, a career, and all the other responsibilities that come with setting off into the world—Kaitlin Sullivan ’10 wanted to devote at least one year of her life to service.

“Giving back, volunteerism, and social justice have always been important to me,” said Sullivan, who majored in political science at Notre Dame. “It was a chance to do something more intentional and radical than I could do when I was older and had other obligations.”

Sullivan remembers talking with professors and fellow students at Notre Dame about how the purpose of their education wasn’t just learning for the sake of learning, but to help them to go out and do good in the world.

It’s a perspective she carried into her service experience—and in her professional career as a product policy manager for Facebook.

“There’s a line in the University mission statement that’s always resonated with me about how a Notre Dame education bears fruit when ‘learning becomes service to justice,’” Sullivan said. “I really appreciate that my Arts and Letters courses encouraged us to think about that and discuss our obligations to each other, in addition to teaching us the skills that would actually help us go out and make an impact on the world.”

After graduation, Sullivan’s began a year of service with the Jesuit Volunteer Corps. She lived with six other women in a former convent in San Jose, California, each of them going off every day to different organizations.

Sullivan was assigned to the local YWCA’s Rape Crisis Center, where she served as an advocate helping victims through their legal proceedings and crisis counseling, as well as sharing educational resources on prevention throughout the community.

At night, she would come home to her fellow volunteers and, together, they would discuss the things they had seen and done. It reminded her of the summer after her sophomore year, when she participated in a service learning program in Uganda with Catholic Relief Services.

Back then, Sullivan had the world in her sights. She planned to make big contributions and be a part of solutions to major global problems.

When she got to Africa, however, she saw that the world’s problems are interconnected and more complicated than she once thought. Helping to cure a preventable disease, for instance, might be hampered by food insecurity issues, poor infrastructure, a despotic government, and educational hurdles.

Sullivan learned that contributing to the betterment of society quite often means playing a part in improving one area of individual lives. In Uganda, she wrote grants, evaluated programs, and chipped away at problems wherever she could.

“There aren’t a lot of easy, top-down solutions for the issues in the developing world. You can’t swoop in somewhere from America and solve the problems,” Sullivan said. “It’s not just that ‘someone doesn’t have enough money.’ It may be an issue of dignity, of human rights and gender equality, or of a corrupt government. It’s most likely all of the above.

“But doing little things has an impact. Doing a lot on a small scale can make a difference in people’s lives.”

At Notre Dame, Sullivan found her passion for social justice issues and was involved with the Center for Social Concerns, the Gender Relations Center, the Student Senate’s Department of Gender Issues, and others. So her work with the Rape Crisis Center struck a chord, and she stayed on for a second year in California, hoping to impact a few more lives.

After that, Sullivan moved to Washington, D.C., where she earned a master’s degree in public policy at George Washington University. During graduate school, she interned with Facebook—where a vice president heard about her social justice volunteerism and put her on a team that works to improve the safety of the social media platform’s users if, for instance, they’re victims of domestic violence.

That internship turned into a full-time job, and Sullivan has become an associate manager of product policy, something she hadn’t envisioned for herself. She always imagined she’d wind up at a nonprofit, assuming that working for a corporation wouldn’t be compatible with the ideals she built during and after her undergraduate years.

But, as she learned through her volunteer experiences, there are many ways to serve others.

“My role at Facebook is an extension of the model I used during my service learning work, where you have to listen to people who are living these issues and understand all the parts to come up with solutions,” Sullivan said. “A lot of the job involves critical thinking. It’s taking what seems like an overwhelming issue, breaking it down, and addressing the parts.”

Sullivan credits her Arts and Letters education with her ability to unravel the complex issues that come at her today.

“I learned how to argue, to articulate myself, to write well, to defend my arguments vigorously, and to think through the implications of what I’m arguing for,” Sullivan said.

And she learned how to look at problems through different lenses—political, economic, theological, and others.

Most importantly, she developed the sense of human solidarity and concern for the common good that continues to guide her today.

“Notre Dame’s focus on educating the mind, the body, and the spirit is important,” Sullivan said. “It helped me set a goal of making sure that what I do from 9 to 5 is not different from what I want to be as a person and how I want to live my life.”