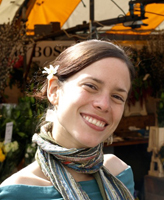 She’s already mastered English, French, and, of course, her native Spanish. Now Natalia Baeza, a graduate student in Notre Dame’s Department of Philosophy, is clearly on her way to conquering German.

“This is really a difficult fellowship to receive, especially in the humanities, so I had only a little hope when I applied,” she says.

But that “little hope” was rewarded, and she is now studying abroad with some of the international leaders in her field.

Baeza’s research focuses on the philosophy of sociologist and composer Theodor Adorno, one of the prominent developers of modern critical social theory and the author of 1950’s seminal work, The Authoritarian Personality.

At the ISR, she gets to work closely with both the institute’s director, Axel Honneth, and Christoph Menke, a noted Adorno scholar. “Menke has written a lot on Adorno, particularly on Adorno’s aesthetics,” Baeza says, “and he invited me to work under his direction and participate on his research seminar. I really like Professor Menke’s work; he’s one of the best contemporary scholars on Adorno in my opinion.”

The German-born Adorno is best known for his work trying to parse the cultural, psychological, and socio-economic impulses and influences that can lead individuals and society into fascism. His theories, Baeza says, remain deeply relevant today.

“What motivated his view was a sense that there was something deeply wrong in modern society,” she says. “He was troubled by the susceptibility of individuals to fascism, and he attributed that not just to government propaganda; he saw it as a pervasive cultural phenomenon.”

Adorno’s presence looms large at the institute where Baeza is continuing her doctoral work. “The Institute for Social Research was the place where critical social theory was born,” she says, “and Adorno was one of the most prominent members of the early ‘Frankfurt School.’

“The institute remains today the most prominent place in Germany—and the world really—where critical theory is pursued. So this is a really great place and intellectual environment for me.”

A Culture of Inquiry

A native of Colombia, Baeza has had to adjust herself to different cultural environments and new languages before. But, she allows, studying, writing and collaborating in German has been one of the most difficult challenges of her fellowship.

The academic style is also a little different from what she first experienced as a graduate student, Baeza says. There is essentially no classwork, and self-direction and deep familiarity with the sociology and philosophy’s “canonical” material is assumed. She attends two seminars that are more or less working opportunities to develop her thinking and share research with other students and instructors.

Although the work is challenging, she says, the community is supportive. “It’s a very congenial atmosphere here, and there are a lot of events in Frankfurt. And of course my fellow students are all good Germans,” she says. “After class everyone goes to the pub to drink beer and talk philosophy.”

She adds with a laugh, “Really that’s where we have some of our best discussions.”