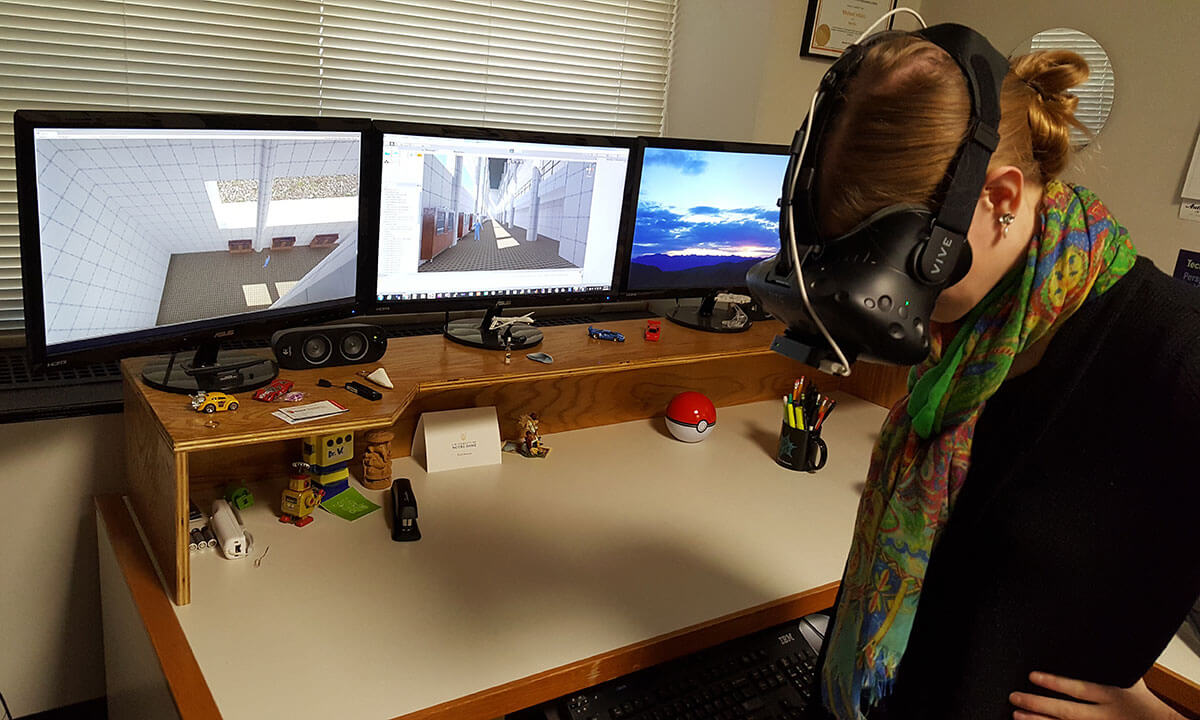 Notre Dame clinical assistant professor Jennifer Hames wears a virtual reality headset while viewing an early rendering of Jordan Hall that will be used to treat fear of heights.

Richie’s Plank Experience begins when a participant steps into an elevator and pushes the button simply marked “plank.”

When the elevator doors open, there is nothing ahead except a narrow wooden beam, jutting out from the side of a skyscraper more than 50 stories in the air. 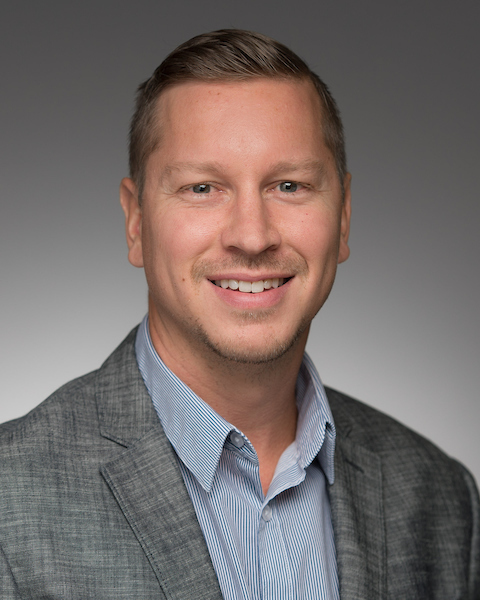 In the distance are other buildings and, farther away, mountains. Far below are the sidewalk and the sounds of traffic in a virtual city.

For the daring, it is a chance to defy the sudden pounding of their hearts, the sensation of vertigo, and to walk out into thin air, to the end of the plank.

But for a team of Notre Dame psychologists, it is much more than a virtual reality game — it is the next frontier in mental health treatment.

Nathan Rose, Jennifer Hames, and Michael Villano, along with Jesse Cougle of Florida State University, are conducting research on the use of virtual reality environments in exposure therapy for participants with a fear of heights.

“Acrophobia — fear of heights — is one of the most common phobias,” said Rose, the William P. and Hazel B. White Collegiate Chair in psychology. “And while the standard therapy is extremely effective, people don’t always do it because it requires going to a clinician and it can be expensive.

“Virtual reality is really exciting because it is massively more scalable and accessible. As the technology develops, people could go through the steps in the comfort and safety of their own home to work through the process of curing their phobias.”

The technology also holds promise for treating phobias like the fear of flying, Rose said, where it would not be feasible for most patients to take multiple flights with a clinician, and for post-traumatic stress disorder in veterans, where a therapist cannot replicate the triggering events in real life.

Rose, who had already begun working with a virtual reality headset in his research on memory in aging populations, discovered Richie’s Plank Experience last year and quickly saw the potential.

“It’s so immersive and realistic and embodied that it gives you most of the sensations you’d have if you were really in that environment,” he said. “It should be a really effective treatment tool.” 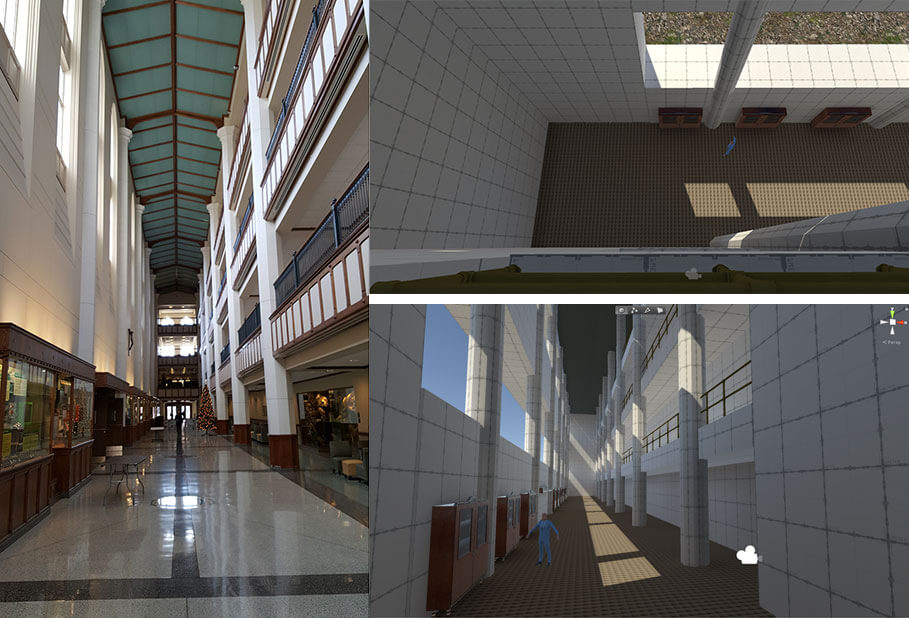 He and Hames, an assistant clinical professor, designed a study to evaluate the use of VR technology in treating acrophobia and were awarded a grant from Notre Dame’s Advanced Diagnostics & Therapeutics to conduct their research this year.

In the study, 50 participants will be taken to various balconies in Notre Dame’s Jordan Hall of Science, where their anxiety levels will be assessed by undergraduate and graduate student research assistants. The participants will be taught coping strategies during the exposure session and should see a gradual reduction in anxiety.

Another 50 participants will undergo a similar experience, using a VR headset to explore a virtual Jordan Hall — programed by Villano, a research assistant professor in psychology and an expert in video game and robot technology.

A final 50 participants will act as a control during the study and will receive treatment after it’s complete. 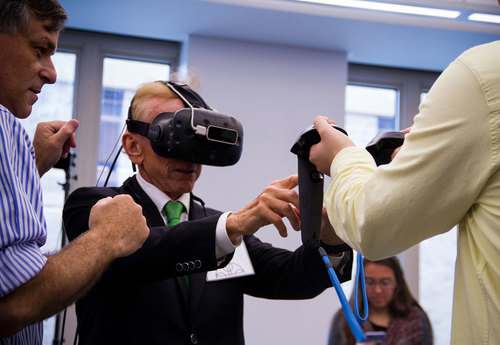 “People with acrophobia tend to avoid situations that cause anxiety — in the upper floors of Jordan Hall, for example, they may walk as far from the rails as possible,” Hames said. “But the more they avoid, the more it fuels anxiety. We ultimately want them to see that their anxiety level goes down the longer they’re in the situation and the more times they approach the rail.

“Exposure therapy is so effective because it builds confidence and gives them evidence that doing these things isn’t going to cause the catastrophic outcome they fear.”

Two weeks after the initial exposure, both the standard treatment and virtual reality subjects will be taken to another building on campus to see whether any positive results continue over time and if they translate to a new, real-life environment.

If the virtual reality treatment proves successful, the team hopes to continue researching the technology — possibly exploring whether it could be as effective with a programmed virtual clinician instead of another person present. Eventually, Rose and Hames envision an app that can be downloaded and used independently.

“Virtual reality is something that’s going to be in everyday households soon,” Hames said. “It’s becoming very accessible. We’re hoping to use that to our advantage so that people will someday be able to access treatments that may help them live the lives they want to live.”

“Virtual reality is something that’s going to be in everyday households soon. It’s becoming very accessible. We’re hoping to use that to our advantage so that people will someday be able to access treatments that may help them live the lives they want to live.”