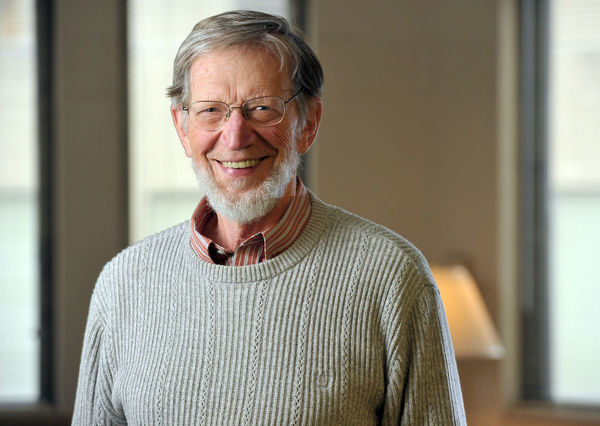 Alvin Plantinga, the John A. O’Brien Professor of Philosophy Emeritus at the University of Notre Dame, was named the 2017 Templeton Prize Laureate on Tuesday (April 25) by the John Templeton Foundation.

Over his 50 years of research in philosophy of religion, epistemology and metaphysics, Plantinga has advanced landmark arguments for the existence of God, returning the questions of religious belief to the common discourse of academic philosophy.

“As a member of Notre Dame’s philosophy faculty, it has been my personal privilege to have as a colleague such a towering philosophical figure so influential in showing the compatibility of faith and reason and the harmony of science and religious belief,” said Rev. John I. Jenkins, C.S.C., University president. “Notre Dame, philosophy and religious faiths of many kinds have been enriched by Professor Plantinga’s remarkable intellectual legacy.”

Plantinga’s foundational achievements include his free-will defense, which refutes the logical problem of evil – or the belief that evil cannot logically coexist with an all-powerful, all-knowing and all-benevolent God – by countering that even an all-powerful God could not create free creatures who always choose good; consequently, an all-benevolent God could not stop evil without eliminating the still-greater good of free will. His view has been widely accepted, even among proponents of the original atheistic argument.

He is also renowned for his epistemological argument that belief in God can be rational without requiring arguments or evidence, claiming that it is difficult to prove that belief in God is irrational and possible to suggest ways in which belief meets the requirements of rationality.

Plantinga’s later work focuses on the logical relationship between religion and evolution.

A Guggenheim Fellowship recipient and fellow of the American Academy of Arts and Sciences, Plantinga has twice delivered the Gifford Lectures. He is the author of numerous books, including God, Freedom, and Evil, Faith and Rationality, Warranted Christian Belief, and Knowledge and Christian Belief.

“I am honored to receive the Templeton Prize,” Plantinga said. “The field of philosophy has transformed over the course of my career. If my work played a role in this transformation, I would be very pleased. I hope the news of the prize will encourage young philosophers, especially those who bring Christian and theistic perspectives to bear on their work, toward greater creativity, integrity and boldness.”

After teaching at Calvin College for 19 years, Plantinga served on the philosophy faculty at Notre Dame from 1982 until his retirement in 2010. The annual Alvin Plantinga Fellow Lecture at Notre Dame is named in his honor.

Valued at about $1.4 million, the Templeton Prize is one of the world’s largest annual awards given to an individual and honors a living person who has made an exceptional contribution to affirming life’s spiritual dimension, whether through insight, discovery or practical works.

“Sometimes ideas come along that revolutionize the way we think, and those who create such breakthrough discoveries are the people we honor with the Templeton Prize,” said Heather Templeton Dill, president of the John Templeton Foundation. “Alvin Plantinga recognized that not only did religious belief not conflict with serious philosophical work, but that it could make crucial contributions to addressing perennial problems in philosophy.”

Plantinga will be formally awarded the Templeton Prize in a public ceremony Sept. 24 at The Field Museum in Chicago, where speakers will include the University of Notre Dame’s Meghan Sullivan, the Rev. John A. O’Brien Collegiate Associate Professor of Philosophy.

The announcement was made online at www.templetonprize.org by the foundation, which is based in West Conshohocken, Pennsylvania.