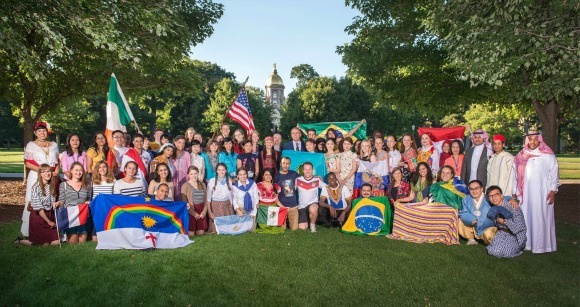 The University of Notre Dame hosted its 10th annual Fulbright Foreign Language Teaching Assistant (FLTA) orientation in August 2015. Sixty-four scholars from 29 countries gathered at Notre Dame to celebrate their arrival in America and prepare for the upcoming year of teaching their native languages in universities across the U.S.

The FLTA program is sponsored by the U.S. Department of State’s Bureau of Educational and Cultural Affairs. During the program, the Institute of International Education supports and supervises teachers from more than 50 countries, who spend one academic year at U.S. universities. The participants add depth to foreign-language classrooms by offering new cultural perspectives and facilitating a deeper understanding of a country’s language and culture.

The orientation plays a key role in preparing the teachers for the year ahead and incorporating them into American culture. In 2006, Notre Dame was the first institution to host such an event for six Irish FLTA teachers. Since then, the program has expanded to seven universities, chosen by the Fulbright program in a highly selective process, to host the orientation sessions.

Associate Professor Brian Ó Conchubhair, director of the University’s Center for the Study of Languages and Cultures, has organized the Notre Dame program since it began. The orientation was initially designed to introduce FLTA teachers to the expectations of the American classroom, he said, but through conversations with Institute of International Education, it grew to cover topics such as American culture, politics, banking, policing, syllabus design, and best practices in second-language acquisition.

In the last 10 years, Notre Dame has hosted a total of 500 teachers. This year’s participants were from Algeria, Argentina, Austria, Brazil, Burma, China, Egypt, France, Germany, India, Indonesia, Iraq, Ireland, Japan, Jordan, Kazakhstan, Korea, Kyrgyzstan, Mexico, Morocco, Nigeria, Philippines, Russia, Saudi Arabia, Spain, Tanzania, Thailand, Tunisia, and Turkey. The event is similar to a “mini-U.N.,” Ó Conchubhair said, with students from all over the world on campus for four days to share their ideas and experiences.

The orientation kicked off on August 8, with the teachers being welcomed at O’Hare International Airport. After they were brought to campus, they celebrated their arrival with pizza in Keough Hall. “They land at night, and they are tired and jet-lagged,” Ó Conchubhair said. “They wake up the following morning on campus, looking at the Golden Dome. Notre Dame serves as their introduction to America—what better welcome could there be?”

The orientation in McKenna Hall included presentations on successful language teaching methods, diversity in the U.S. classroom, grading and academic integrity, conflict resolution, the needs and hopes of the American student, challenges faced by international students in America, and technology in the classroom. The sessions on syllabus planning, adapting to American culture, and safety on campus were viewed as particularly useful by some of the teachers, Ó Conchubhair said.

Woods said the orientation exposed him to the immense diversity of the Fulbright program and prepared him for the range of cultural backgrounds he would later find in his classroom and in his work at the CSLC.

“The organization of the orientation at Notre Dame made it possible to get a true sense of the global scope of the Fulbright FLTA program,” he said. “I have not experienced this in any other setting.”

Niño appreciated that the orientation allowed the teachers to gather and share their thoughts and questions before embarking on the new school year. “It gave us the courage and motivation to face the challenge together before splitting into different universities,” he said.

The final event, a farewell banquet on Aug. 12, celebrated the close relationships and global connections the teachers developed during the orientation.

“The most memorable part of the program was the last dinner we had with all the FLTAs and officials and professors from Notre Dame,” Zhang said. “It was a wonderful gathering.”

Ó Conchubhair agreed that the banquet—where FLTA teachers were asked to wear the traditional dress of their countries—was a highlight of the program.

“They are so excited and energetic, yet sad to leave Notre Dame and the community of friends they have just formed,” he said. “Each teacher left the orientation with a support base for the year ahead.”