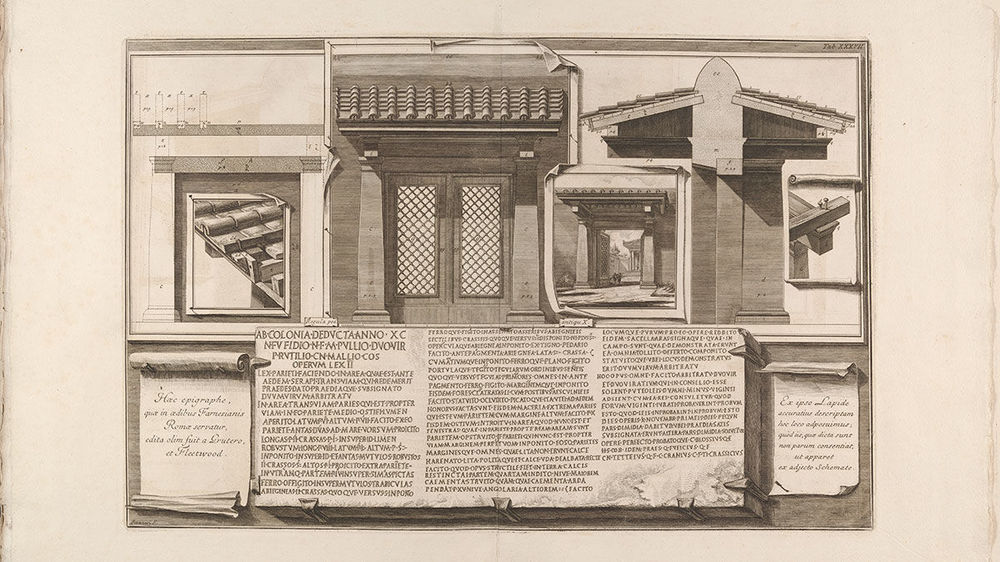 While early modern artist Giovanni Battista Piranesi has been principally known for his drawings and etchings of ancient Rome, new research from Heather Hyde Minor, professor of art history at the University of Notre Dame, reinterprets Piranesi’s artistic oeuvre by flipping the works over and reading what is written on the backs.

Minor’s Piranesi Unbound, co-authored with Carolyn Yerkes, associate professor of early modern architecture at Princeton University, examines nearly 200 of Piranesi’s engravings and drawings. The researchers work from the perspective that these prints were meant to be pages in a dozen volumes about the monuments and history of Rome, and also about the limits of what can be known about the past. The research, recuperative in method, serves as a biography of Piranesi’s books, bringing text and image together to reveal a learned mind alive with biting wit and unflinching big-picture questions.

“Piranesi loved to make ancient Rome look grandiose and overpowering,” Minor said. “He also knew how to use images to make arguments in service of advertising.”

Many of Piranesi’s early works were copperplates sold to Roman publishers as illustrations for Grand Tour guidebooks. Later in his career, he became a publisher himself.

When Minor arrived at Notre Dame in 2015, Cheryl Snay, curator of European art at the Snite Museum of Art, pulled some drawings based on Minor’s research interests. One was a Piranesi drawing, and when Minor turned it over, she found a printed text.

“This was very exciting because I knew that just a few months prior, Princeton University had acquired another sheet by the artist that also had text on its back,” Minor said.

Starting with the idea that the drawings must be made on pages from a book, she began reconstructing these passages about tombs, which included italicized text signaling ­content quoted from other sources. There were also spelling mistakes, suggesting the drawings were made on discarded proof pages for a book, not a finished product.

Thus began a multi-continent, multi-scholar collaboration to study the backs of Piranesi drawings, many of which are located in London, Berlin and New York. Minor said it was essential to go and physically see the objects; in order for Piranesi to print a text or image on paper, the paper had to be damp, which is why his drawings had to have been done last.

What Minor and colleagues found in these works was the artist telling them about his work and his life — his art.

“Most of these drawings show men working in Piranesi’s print shop, and he’s sitting there with a scrap paper pile next to him, doodling, looking at the guy who is hanging up wet prints on a clothesline, or working on a copperplate while wearing the heavy apron to keep acid off him,” Minor said.

On these pieces of waste paper, Minor said, Piranesi sketched images of men printing on paper, with the visual effect of sitting next to the artist, looking over his shoulder in his studio.

“If we stop looking at these drawings as loose sheets of paper and think about them as designed to be pages of books that go with other printed images, that can open up a new way of seeing the career of one of the 18th century’s great artists,” Minor said. “Bookmaking was his primary medium, not printmaking.”

These findings have significant implications for museums and also collectors, Minor said, adding that Piranesi’s broad fan base includes such figures as Victor Hugo and Walt Whitman.

Beyond its impact on the art world, this research has broad interdisciplinary value because of the kinds of questions central to Piranesi’s work. Like many thinkers of his time, Piranesi was engaged in the process of distinguishing primary and secondary sources.

“‘How do we know what we know?’ is Piranesi’s core question across media, and he challenges us to think about what texts can teach us, and not to limit our view of what counts as evidence or a primary source,” Minor said.

Currently on sabbatical in Rome, Minor is working on a biography of Piranesi for a non-specialist audience.