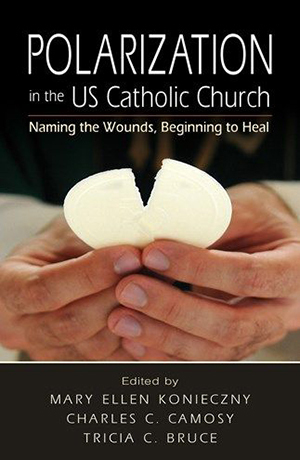 While universality—and unity amid diversity—is a fundamental characteristic of Roman Catholicism, all-too-familiar issues related to gender, sexuality, race, and authority have wrought the church with internal conflict and no clear path to finding middle ground.

A new book, co-edited by Mary Ellen Konieczny, intends to start the conversation about the polarization in the Catholic Church through healthy debates and genuine engagement.

Konieczny, associate professor of sociology and Henkels Family Collegiate Chair at the University of Notre Dame, edited and contributed to a collection of essays titled Polarization in the U.S. Catholic Church: Naming the Wounds, Beginning to Heal (Liturgical Press, 2016) with alumnus Charles C. Camosy ’97 Ph.D. ’08 of Fordham University and Tricia C. Bruce of Maryville College.

The book confronts issues U.S. Catholics tend to avoid debating, such as sexual orientation, abortion, and racism, and attempts to contribute to an environment for amicable discussion.

“Rather than the healthy debates characteristic of a living tradition,” says Konieczny, “we have witnessed—in our churches, in our public politics, and in the local context of our everyday lives—an absence of genuine engagement and dialogue. Catholics of good will often feel alienated from one another. This alienation is not the product of a mere disagreement but of disrespect and dismissal of others. It wounds people.”

Polarization in the U.S. Catholic Church grew from a conference of the same name held at Notre Dame in 2015 and organized by Konieczny, a faculty fellow at the Center for the Study of Religion and Society. Catholic priests, public intellectuals, theologians, and social scientists of diverse ages, races, and ethnicities gathered to discuss the divisiveness in the U.S. Catholic Church and how to spur reconciliation.

“We conceived the process of the conference through the ‘see-judge-act’ model of Catholic Action, bringing both theological and social-scientific perspectives into the dialogue,” Konieczny wrote in the introduction. “We chose this method believing that if we began with a careful and informed observation and assessment of current cultural conflicts among Catholics and in society more broadly, we could then think creatively about small but concrete steps we might take toward promoting healing and a greater sense of unity among us. This book is one such step in this direction.”

The book is a collection of essays, each authored by a different conference speaker, grouped into four parts: “This Moment in the Church,” “Naming the Wounds,” “Assessing the Problem,” and “Looking to the Future.”

Among the contributors are Reverend John I. Jenkins, CSC, president of the University of Notre Dame, and Most Reverend Daniel Flores, bishop of the Diocese of Brownsville, Tex.  Authors explore the impact Millennials and a growing Hispanic population are making on the church.

At the heart of the book is the point that there is still much that binds American Catholics together and that healthy engagement and dialogue are needed to heal many decades-old wounds.

“While polarizing rhetoric is used effectively by people to serve their interests, I believe it is poisonous for the church,” says Reverend Jenkins. “I think Pope Francis is right when he says that people come to the church through attraction. But the acrimony of many of our conversations obscures the beauty of the church; it attracts few and drives away many. We must act to serve our true interest, which is the true salvation of our souls and the coming of the reign of God.”