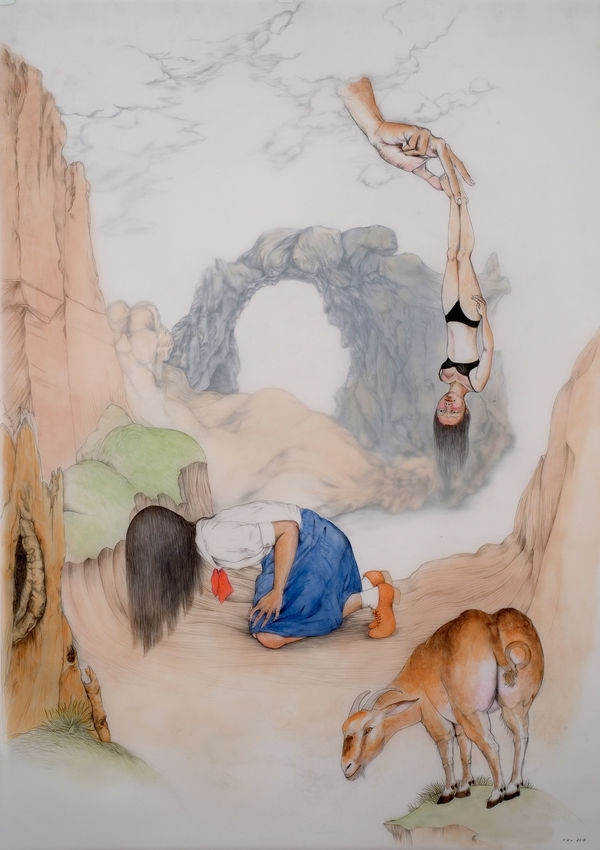 The University of Notre Dame’s Snite Museum of Art presents Raising Children for Strangers, featuring the latest work of the Brooklyn-based, Taiwanese-American artist Fay Ku. The special exhibition is a collaboration between the Institute for Scholarship in the Liberal Arts, the Liu Institute of Asia and Asian Studies, and the Snite Museum.

The seven pieces featured in the exhibit are hybrid works of art that, to use the artist’s own words, “adopt visual tropes from both Western art and found images from social media to create tableaux that are open-ended narratives.”

“The course helps students build a sophisticated vocabulary for the place where East meets West, historically and now,” Da said. “This particular exhibit will be an opportunity for students to talk about East-West interpollination—its techniques, its structures of feeling, and its allusions—as well as the place of feminism in this traditionally masculinist discourse.”

The references in Ku’s "wondrous and strange" works are broad and intellectually stimulating, Da said.

The artist’s exquisitely drawn figures and icons merge traditional techniques from Chinese brush painting with those of natural science catalogs. The works are mixed media on layered sheets of mylar. They include “Before the S-Exile,” “O Great Bird in the Sky,” “Throne,” “Fontainebleau,” “Three Eves,” “High Touch,” and “Desire is What You See Everyday.”

Fay Ku will travel to campus to discuss her work on Friday, September 30. The artist talk begins at 5 p.m. in the Snite Museum’s Annenberg Auditorium, with a reception to follow. The event is free and open to the public.

Raising Children for Strangers is on display through October 23 in the Snite Museum’s Scholz Family Works on Paper Gallery. The exhibition is intended for a mature audience. Some images may be inappropriate for children.