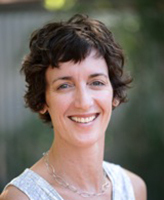 About seven years ago, Mary Celeste Kearney began noticing how much “sparkle” had become part of girls’ culture—in makeup and clothing, as well as in girl-oriented media.

She began compiling a “taxonomy of sparkle” in contemporary films and TV series to explore its sociocultural significance.

The resulting essay, “Sparkle: Luminosity and Post-Girl Power Media,” has been honored with the Katherine Singer Kovács Essay Award from the Society for Cinema and Media Studies.

“There is no doubt that the essay is a major achievement that simultaneously gestures toward a critical tradition, provides a powerful original analysis, and invites a wide readership,” the selection committee wrote. “This outstanding piece of writing leads us to notice sparkle everywhere and moves us to think about it in new ways.”

Kearney, an associate professor in Notre Dame’s Department of Film, Television, and Theatre and director of the Gender Studies Program, examined the phenomenon of sparkle in contemporary U.S. girls’ media—from depictions of magic through animated special effects, to environmental sparkle in the form of twinkling stars and shimmering lights, to the adornment of girls’ bodies via glittered makeup, sequined clothing, and bejeweled accessories.

“I am honored and proud that my work is being recognized in this way by my colleagues within SCMS,” Kearney said. “Although I remain ambivalent about sparkle’s larger impact, particularly since it has been used by so many different types of people for many different purposes, I hope that my article also brings attention to the effeminophobia—fear of femininity—that permeates our own and other societies.”

“Through my research, I wanted to explore the breadth of meanings related to sparkle as a visual aesthetic and draw attention to the potentially positive aspects of sparkle in girls’ lives,” Kearney said, “especially with regard to inspiring and sustaining their interests in making their own media.”

Paying attention to how girls feel about this visual phenomenon and what they do as a result is crucial. Media created by girls today are “overwhelmingly luminous in their bedazzling, spectacular displays of empowered girlhood,” Kearney said.

“These texts bear witness to a creative process that allows girls to spend considerable time in the wondrous beauty of sparkle,” she said. “Will such practices make the shimmering post-feminist masquerade all the more alluring to these girls? Perhaps. But might not basking in sparkle be one of the chief pleasures in their creative practices? And might not that encourage that future engagement in other media work?

“I am all for sparkle, if that’s what gets girls involved in creating media.”

Kearney focuses her research and teaching primarily on gender, youth, and media culture.
She is the author of Girls Make Media, and the editor of Mediated Girlhoods: New Explorations of Girls’ Media Culture and The Gender and Media Reader.

She is currently working on a book on gender in rock culture, Power Chords and Groupie Chicks, and a historical book project, Making Their Debut: Teenage Girls and the Teen-Girl Entertainment Market, 1938–1966. She is also co-editing two books: Mediated Girlhoods: New Explorations of Girls’ Media Culture, Volume 2 and The Craft of Criticism: Critical Media Studies in Practice.