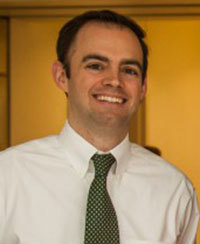 Dr. Patrick Lyons ’08 doesn’t ask his patients if they have questions when he’s finished talking with them about a diagnosis. There’s a good chance they’ll say no.

Instead, he asks what questions they have. If he does that, it starts a real conversation.

“It acknowledges that they almost certainly have questions and gives them a moment to think about what they want to ask,” said Lyons, a chief resident in internal medicine at the University of Chicago Medical Center. “Words are really powerful, and when chosen carefully—especially with people in delicate circumstances—they allow me to be more than someone conveying information. They allow me to engage with a patient in a partnership for their health.”

That attention to the details of language was fostered during his time as an English major in Notre Dame’s College of Arts and Letters. As a first-year student, he was unsure of his academic and career goals, so he decided to focus on his love of literature.

He took the time to study why authors chose certain words and how those choices bestowed particular meaning. Two words may be synonyms, he learned, but they don’t always convey the same idea.

“I’ve always been passionate about literature, looking for patterns and themes in what I’m reading and using my own writing to critically understand literature,” Lyons said.

Eventually, he added a major in Arts and Letters pre-health, which allowed him to continue the English studies he enjoyed while also preparing for medical school.

“This seemed like a perfect hybrid,” he said. “It let me take the pre-med course requirements, but it gave me time to take a full curriculum of English and to study abroad.”

The Search for Understanding

For a while, his two courses of study seemed disconnected. But while working on his senior thesis, Lyons found the point where his love of English and of medicine intersected.

He wrote about the influence of Shakespeare’s The Tempest on contemporary Caribbean poetry, and as he started connecting the elements that formed his argument, he realized that wasn’t so different from the way doctors solve medical problems with their patients.

“I took this complex issue and laid out all the small questions and pieces to make sense of it,” Lyons said. “It gave me a taste of what my career could be like. It was eye-opening for me.”

Lyons was discovering that he loved the search for understanding, and he could find that in both uncovering complex themes in novels and in medical research. It was a significant factor in his decisions to pursue opportunities to teach and do research as a doctor.

“The chance to get out to teach is phenomenal. It’s like it’s a lot of different jobs rolled into one,” Lyons said. “Every day is different, and you get to take part in a lot of activities that are intellectually stimulating.”

The Power of Language

Looking at how he practices medicine now, especially in his interactions with patients, Lyons realizes his English studies have had a profound effect on how he communicates. Beyond the way in which he asks patients questions, he’s learned how to evaluate them in more subtle ways.

Instead of delivering news the same way to all his patients, he tries to learn a little about them. Their culture, age, education, and other circumstances can play a role in what they understand and how they interpret what’s being said.

“English prepared me well because I have the ability to think critically and organize and analyze the information in front of me,” Lyons said. “Word choice and the way you’re addressing patients can be really powerful.”

In July, Lyons will move to Washington University in St. Louis, where he will be a pulmonary and critical care fellow, learning to manage an intensive care unit and caring for patients with a variety of lung conditions.

His passion for research has led him to study critical care outcomes. During his training, he has learned to work with large databases of anonymized patient information to understand how this data may predict clinical deterioration among hospitalized patients. He hopes to develop a tool that could signal to care providers when a patient is at increased risk of a negative outcome.

Of particular interest to Lyons are patients transferring between hospital units, such as those moving from intensive care units to general wards.

“Patients tend to be vulnerable at transitions of care. They’re meeting new providers and people who will be engaged in their care, and proper communication is vital in improving their conditions,” Lyons said.

He approaches that work much in the same way he approached his English thesis.

“With patient-level data, looking for patterns and being willing to re-evaluate a hypothesis is important,” Lyons said. “There are a lot of similarities with my work in English. One has had a big effect on the other.”