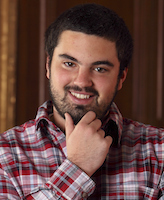 Pride in his cultural heritage and a love of literature prompted Matthew Coyne—a Notre Dame senior majoring in English—to delve into the origins of the Appalachian literary journal Cold Mountain Review.

“My professors encouraged me to study what I love,” says Coyne, who was raised in Parkersburg, W.Va., a small town located in the heart of Appalachia. “So I did—and I haven’t looked back since.”

Indeed, Coyne used his summer last year to do research at Appalachian State University (ASU) in Boone, N.C., where three students founded Cold Mountain Review in the early 1970s. The trip was funded by an Undergraduate Research Opportunity Program (UROP) grant from Notre Dame’s Institute for Scholarship in the Liberal Arts.

“My research asks what I consider to be important questions about how residents of Appalachia relate to the region, how they shape their identities, and what that means for the future of the area,” Coyne says. “As someone who grew up in West Virginia, this is something incredibly important to me.”

Coyne set three goals for his UROP project: thoroughly study the works and histories of the journal and its early writers, interview as many of the founding authors as possible, and turn the research into a paper suitable for submission to an academic journal.

Although each of the journal’s founding authors has received some academic attention, the influence they had on each other and literary society has never been adequately investigated, Coyne says.

“It was an exciting experience to know my work was filling in a gap in the field of Appalachian literary studies, a subject that means so much to me,” he says.

Coyne spent the first few weeks of his trip in ASU’s archives poring over all the information he could find about the journal. He then conducted an extensive interview with two of the founders.

“I learned a lot about the relationship between higher education and literary production in the Appalachian south,” he says. “I also was very interested to find that the literary community in Appalachian State’s graduate school in the 1970s more closely resembled the community of the Fugitive poets at Vanderbilt in the 1920s than it did the emerging culture of creative writing programs springing up across the country.”

After doing his initial research, Coyne donated his interview recordings and more than 40 pages of transcripts to the W.L. Eury Appalachian Collection archives at ASU’s Carol G. Belk Library. He also created an edited version of his interview, with introduction, which he submitted to Appalachian Journal, a multidisciplinary, peer-reviewed journal published at ASU.

“Much of the scholarship with which I became familiar this summer will be a vital part of my thesis,” he says. “And the contacts I made at Appalachian State will certainly be useful as I work toward completing the thesis.”

Coyne says ASU English Professor Thomas McGowan, a Notre Dame alumnus, was a valuable resource throughout his research project. At Notre Dame, his senior thesis and summer research adviser, Kate Marshall, an assistant professor in the Department of English, has also served as a resource and mentor.

“Beyond the conversations we’ve had about literature in and outside of the classroom,” he says, “she has just been a great help as I try to get an idea of my future plans, whether that be in graduate school or something else.” Next year, Coyne will be working as a technical writer for a software company and hopes to, one day, pursue work in the publishing industry.

“But regardless of what I end up doing and where I end up doing it, I am committed to encouraging conversation in and about Appalachia,” Coyne says. “I hope my work will contribute to this purpose.”