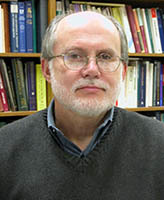 Ken Garcia, a faculty member at the University of Notre Dame, has been named a co-winner of the College Theology Society’s 2013 best book award for his work, Academic Freedom and the Telos of the Catholic University.

The College Theology Society is an association of more than 900 college and university professors throughout the United States, Canada, and Europe. Garcia shares the organization’s book prize with Maureen O’Connell, an associate professor of theology at Fordham University and author of If These Walls Could Talk: Community Muralism and the Beauty of Justice.

“I was both surprised and, of course, very pleased when I received news of the award,” says Garcia, associate director of the Institute for Scholarship in the Liberal Arts in Notre Dame’s College of Arts and Letters. “It was an unexpected honor.”

Garcia’s book explores the concept of academic freedom as it originated in early 19th century Germany and as it has evolved in public and Catholic universities in the United States. In particular, he is interested in scholars’ rights to explore the theological dimension of their fields.

“When first developed, academic freedom meant both the freedom from external interference by political or ecclesiastical authorities, and the right to examine one’s finite area of study—one’s academic discipline—in relation to the whole of knowledge, or the infinite.

“That right to place one’s specialized learning within a broader theological context was slowly eroded in the United States.” 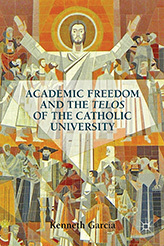 Garcia insists that while most scholars will understandably focus solely on their own field, all faculty members—especially in Catholic universities—must have the freedom to explore beyond their discipline and engage philosophical and theological traditions if they choose.

“We have a natural orientation toward God and want somehow to understand all things in relation to what is ultimate,” he says. “So scholars must be free to connect knowledge in their disciplines to theological insight. By that, I mean a subtle, yet certain spiritual awareness that there is a surplus of knowledge and meaning to reality that goes beyond what can be known through ordinary disciplinary methods of inquiry.

“Findings in many fields of study hint at connections to a greater whole, and those connections should be pursued.”