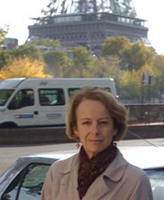 Julia Douthwaite, professor of French and Francophone studies in Notre Dame’s College of Arts and Letters, has been selected to receive the 2013 Sheedy Excellence in Teaching Award.

“Douthwaite is one of the most influential and effective scholar-teachers to have graced our department since it was established,” says Theodore Cachey, Albert J. and Helen M. Ravarino Family Director of Dante and Italian Studies and immediate past chair of the Department of Romance Languages and Literatures.

“She has provided us with a model to imitate in her extensive mentoring of undergraduate and graduate students; in her involvement of students in research, including the mounting of exhibitions and conferences; and in the organization of co-curricular activities ranging from film series to the monthly coffee hour of the French community.”

The highest teaching honor in Arts and Letters, the Sheedy award was founded in 1970 in honor of Rev. Charles E. Sheedy, C.S.C., who served as dean of the College from 1951–69.

The award ceremony will take place on December 12, 2013, at 3:30 p.m. in the Notre Dame Conference Center in McKenna Hall and is open to all faculty and students. 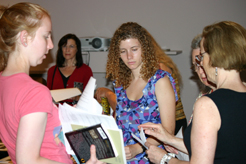 “Her teaching and mentorship have profoundly influenced my undergraduate experience,” says one student nominator. “Throughout my time at Notre Dame, I have seen Professor Douthwaite going out of her way time and again to ensure that students have full access to the opportunities afforded them by this University.”

Douthwaite is also known for her innovation within and outside the classroom. “I have been consistently impressed by Julia’s creativity and rigor,” says one colleague, “which have produced exceptionally important initiatives such as the DIGNITY project she brought to campus last year.”

The DIGNITY project, which honored the tricentennial of Swiss philosopher Jean-Jacques Rousseau’s birth, included a series of guest lectures and a powerful photography exhibit on poverty and human rights in conjunction with Amnesty International.

Douthwaite collaborated with several of her students to bring the exhibit to the Snite Museum of Art. She credits them for helping make the project a reality and says she has learned from their ebullience.

“That spirit of ‘Why not? Let’s try it!’ is inspiring,” she says. “We laughed together thinking we were going to do this—and then we did it. It was a wonderful experience.” 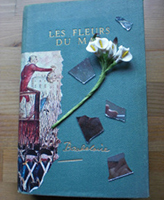 Julia Douthwaite offers students the opportunity to do an “altered book” project.

Nominators were also quick to note that Douthwaite is “never one to rest on her successes,” according to DellaNeva, and praised her for “constantly enhancing and developing her courses.”

Recently, for example, she began offering students the opportunity to do an “altered book” project in her classes. Douthwaite says the idea came out of a discussion with a fellow professor in the Department of Art, Art History, and Design on how to bring new creative techniques to the classroom.

“You take a hardbound book—a used book, so it’s a sustainability project, too—and then you alter it,” says Douthwaite. “You make it tell a different story.”

She and her students use a variety of methods to add their own text and images to the books, even partially burning pages or attaching such items as broken glass. The projects are a lot of work, but she says her students find the experience memorable and inspiring.

Artistic endeavors like these, she adds, complement and enhance her own scholarly writing.

“Using my creative energies in different ways, I find that I’m more productive than ever,” she says, “because I’m just so happy.” 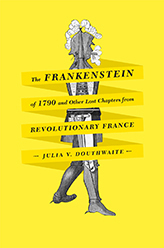 Douthwaite focuses her research on the French Enlightenment, the Revolution, and French-English relations in the 18th and 19th centuries.

She has received grants from the John Simon Guggenheim Memorial Foundation, the National Endowment for the Humanities, and the Lilly Foundation. She is author of The Wild Girl, Natural Man, and the Monster: Dangerous Experiments in the Age of Enlightenment and Exotic Women: Literary Heroines and Cultural Strategies in Ancien Régime France.

Her most recent book, The Frankenstein of 1790 and Other Lost Chapters from Revolutionary France (University of Chicago Press, 2012), shows how key events of the French Revolution took shape through newspaper reportage and imagery produced during the turmoil, and how those same events were later retold by authors such as L. Frank Baum, Mary Shelley, Honoré de Balzac, and Charles Dickens.

She is currently working with Notre Dame Associate Professor Alison Rice on a research project with Indiana University Bloomington that includes workshops and an October 2013 conference called Circulating French in the Classroom. “This is a democratic move,” Douthwaite says. “It invites readers and students to enjoy contact with writers who have been ignored by the keepers of the French tradition.”

During her time at Notre Dame, Douthwaite has served as associate dean in the College of Arts and Letters, director of Notre Dame’s study abroad program in Angers, France, and assistant provost for international studies. She is also an active volunteer in the local South Bend Community Schools and teaches in Notre Dame’s Upward Bound summer academy. 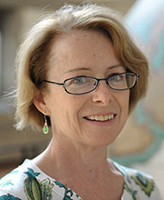 Julia Douthwaite, winner of the 2013 Sheedy Excellence in Teaching Award.

Douthwaite says she was surprised to learn she had received the Sheedy Award. “I don’t feel like one of those people who win that award,” she says, “because I’ve struggled with teaching and have found it difficult.”

That struggle, notes Cachey, is because she strives constantly to maintain the highest standards. “The distinguishing characteristic of her teaching is its uncompromising commitment to continuous improvement, both of her students and her own.”

Douthwaite says her teaching style has evolved over the years, focusing less on giving students information and more on allowing them to discover key messages for themselves.

Watching her students’ skills develop and seeing what they can accomplish is rewarding, she says. “It gives me hope for the future and excitement about working with these young people,” she says. “It’s neat to see the spark in their eyes.

“I seem to see it more and more, that little spark, so something must be going well.”