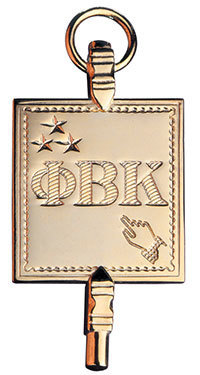 For his book pulling together the complex history of philology and how Western humanistic learning split into the modern humanities that we know today, Notre Dame historian James Turner has received the Phi Beta Kappa Christian Gauss Award.

Phi Beta Kappa is the oldest honor society for the liberal arts and sciences in the United States. The Christian Gauss Award is given for books in literary scholarship or criticism and is named for the distinguished Princeton University scholar, teacher, and dean who also served as Phi Beta Kappa president.

Turner’s book, Philology: The Forgotten Origins of the Modern Humanities, looks at how learned researchers once included languages, history, and texts in a single broad field of study that came to be known as philology.

But in the 19th century, this encompassing field started breaking into what would become the modern fields of study recognized as the humanities today.

“Most of the fields that we now group together as the humanities, which became separate disciplines only in the 19th century and early 20th century, are descended from philology,” said Turner, the Cavanaugh Professor of Humanities Emeritus. “Because of this shared descent, many separate humanities have a lot in common.”

Turner’s book explores those commonalities and why they are so important at a time in which the humanities fight to stay relevant in the eyes of society.

The split into separate fields, Turner says, likely came from changes in social and economic organization that led to increasingly specialized jobs or careers, a pattern imitated in colleges and universities.

“There is a certain kind of artificiality to disciplines,” he said. “Knowledge does not fit neatly into separate boxes. No sooner do you get modern disciplines, but you get organizations that are created to overcome separated disciplines. There have always been calls for interdisciplinary work to break down those walls.”