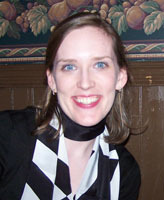 Catherine Cangany can’t stop thinking about fakes. Luckily, the American Council of Learned Societies (ACLS) doesn’t want her to stop. Cangany recently won an ACLS fellowship for her proposed research project “An Empire of Fakes: Counterfeit Goods in Eighteenth-Century America,” which will analyze counterfeit goods travelling around the Americas during the colonial period.

With the grant, Cangany will take the next year to conduct research in London, Boston, New York, and Charleston, S.C. She also won a six-month fellowship, funded by the National Endowment for the Humanities, to research at the John Carter Brown Library in Rhode Island.

Cangany, an assistant professor in the Department of History, says she was shocked to win the ACLS fellowship. “It’s not often that ACLS funds brand new projects so I was not expecting it at all,” she says. “I was stunned but I’m thrilled.”

Her research is grounded in the past, Cangany says, but it is a topic that resonates today.

“These counterfeit goods have a lot to tell us about economies and cultural practices, and the way people evaluated merchandise they were bombarded with all day long,” she says. “That’s something people are still facing in 2013.”

Cangany’s interest in the colonial period began when she once lived in Washington, D.C., and spent her spare time visiting historic sites. Her budding interest compelled her to return to graduate school and study history. While at the University of Michigan, Cangany completed her dissertation on colonial Detroit.

Part of her research for that project involved a look at counterfeit moccasins. “I enjoyed that needle in a haystack work so much that I decided to continue it,” she says.

While hard to track down, fakes were surprisingly common, she says. “Probably more than half of the transactions in the colonial period were illegal. Counterfeit goods are a really interesting way to think about the underground economy and the exchanges that were not recognized or regulated by government.”

Cangany has to be creative in her research, given that underground goods are by nature undocumented and difficult to track down. “I’m looking at administrative records both in Europe and the Americas,” she says. “There are records such as treasury papers, customs papers, and newspaper reports (what we might call ‘buyer beware’ notices) that all contain references to fakes. It’s a piecemeal project that depends on a whole bunch of sources.”

Cangany says she is eager to dive into her new research. “I’m going to miss teaching, but I’m really looking forward to being back in the archives.”

In fact, she says, her favorite part of any history project is the archival work.

“It can be such a thrill when you are surrounded by this old paper, working through it, and you find something you did not expect to be there or that conforms a hypothesis you had,” she says. “Trawling through those documents and finding something really incredible is a great feeling.”

Wherever her project takes her, Cangany is in good company. This year, three other faculty members in Notre Dame’s College of Arts and Letters have been awarded ACLS fellowships.

The ACLS selected just 65 winners from among 1,121 applications this year.