“As a glance down any street in America quickly reveals, American women have forgotten how to dress. We chase fads, choose inappropriate materials and unattractive cuts, and waste energy tottering in heels when we could be moving gracefully. Quite simply, we lack the fashion know-how we need to dress professionally and flatteringly.”

The author of The Lost Art of Dress: The Women Who Once Made America Stylish appeared on NPR’s The Diane Rehm Show on June 11 and her book was recently featured in The New York Times Sunday Book Review, and The Boston Globe.

CNN (“Behind the changing fashion of ‘Mad Men’”) called her for comments on the fashions of the ’60s and what fashions we might have to look forward to in Season 7. NPR’s Here and Now and the New York Daily News also invited Przybyszewski to talk about her book, and the Wall Street Journal and Time each recently published essays she wrote about the lost art of proper dressing in America.

She is interested in how people have used the power and authority of the state in the name of race, morality, religion, or even beauty. Her previous book, The Republic According to John Marshall Harlan, explained how the only consistent 19th Century defender of black civil rights on the United States Supreme Court justified his famous dissents, including Plessy v. Ferguson. Her next book project focuses on the Cincinnati Bible War, which broke out when city’s school board ended Bible reading in 1869.

Przybyszewski teaches courses on legal and cultural history, including crime, the gap between popular and academic history, the era of the U.S. Civil War and Reconstruction, and the history of fashion and dress. 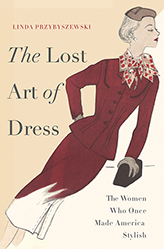 She’s also an expert (and prize-winning) dressmaker from a family of women who sew, and has sewn since she was a little girl. She’s taken millinery classes and makes hats (although she doesn’t knit sweaters, and can’t cobble her own shoes, she notes.)
“I may be the only historian to lecture at the Supreme Court in a suit that won a blue ribbon at a county fair,” she says.

The Lost Art of Dress draws on her collection of more than 700 dress and sewing manuals dating from the early 1900s, as well as material from archives and libraries, focusing on what she calls “The Dress Doctors,” women who, in the early part of the 20th century, taught women to dress well on a budget via books, radio, and home economics classes.

There used to be a difference between city and country dress, and between day and evening dress, Przybyszewski says. People used to dress up for church and for funerals.

“Employers today have to cope with young employees who can’t distinguish between appropriate attire for the beach and for the office.”

In the 1950s, “women used to be taught artistry, thrift, beauty, practicality,” Przybyszewski says. “We did lose something by losing this information. We’d be a lot less confused about what to wear if we learned these rules.”

Look for features on Przybyszewski (pronounced preh-beh-shev-ski) and the book in Stitch Magazine’s summer 2014 issue and Vogue Pattern Magazine’s May 2014 issue.

She also has a website and a tumblr blog, The Lost Art of Dress.