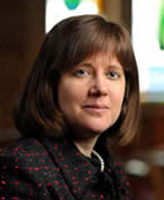 Deborah Tor, an assistant professor in Notre Dame’s Department of History, has recently been awarded fellowships from the Institute for Advanced Study (IAS) in Princeton, N.J., and the National Endowment for the Humanities (NEH). Both awards recognize her research on the reign of the Great Seljuq Dynasty in the Islamic heartlands.

In addition, Tor is one of three faculty members from the College of Arts and Letters to be awarded an NEH fellowship for the 2013-14 academic year.

A Black Hole in History

The Seljuq Dynasty (1040-1194) was pivotal in the trajectory of Islamic history. The Seljuqs were the first of several successive waves of Central Asian nomadic confederations to invade and conquer the central Islamic lands, inaugurating a thousand years of foreign Turco-Mongol rule. They were also the first since the political disintegration of the original unitary Caliphate to rule over the entire Middle East.

The Seljuqs presided over and helped shape major religious, political, and societal changes, during which many of the final contours of classical Islamic society took shape, Tor notes. The ramifications of their rule extend to the present, including such developments as the concept of a universal Sultanate, the flowering of Islamic chivalric ideals and their literary expression, the tying of the Sunni religious clerics and mystics to the government, and the proliferation of non-state-controlled, native militias.

According to Tor, very few scholars research the complex time in the Middle East between the dissolution of the Caliphate in the ninth century and the coming of the Mongols in the 13th century. “It is frequently called the ‘black hole’ of Islamic history,” she says.

“Because of the demanding linguistic requirements, it’s been completely neglected,” she says. “In most doctoral programs, people learn Arabic well, but they don’t really learn Persian.”

Researching this period not only requires reading numerous sources in both classical Arabic and Persian, she notes, but the main texts are also considered particularly difficult due to their florid and metaphorical language.

A Window Into Vanished Worlds

As a scholar, Tor specializes in the political, social, religious, and military history of the medieval Middle East and Central Asia, from the rise of Islam until the 13th century. She says she enjoys this period in particular because she finds the medieval world “much more colorful than the modern world.”

As a teacher, Tor works to make this past come alive for her students. “I try to help them to see that these people, who lived so long ago and in such a different cultural context, were not alien beings,” she says. “Yes, they had different values and customs, but the problems they faced, the solutions they found, the culture they developed—these are all things students can learn to appreciate. It broadens our students not just intellectually but also as human beings.

“One thing that I love about this period—and my current project—is that one doesn’t have to search for its significance,” she continues. “It’s fraught with significance; it’s jumping out at the reader from every page of every chronicle. For me, that’s the entrancing part.”

After her current project, Tor plans to continue her work in medieval Islam with a history of the entire Abbasid Caliphate, from 750 to 1519.


IAS is one of the world’s leading centers for theoretical research and intellectual inquiry, and has been home to distinguished scholars such as Albert Einstein, Kurt Gödel, and J. Robert Oppenheimer. Of the approximately 1,500 applicants to the IAS each year, only 190 are chosen for membership.

One of the largest funders of humanities programs in the United States, the National Endowment of the Humanities is an independent federal agency that” serves and strengthens our republic by promoting excellence in the humanities and conveying the lessons of history to all Americans.” Arts and Letters faculty have had noteworthy success with NEH grants, receiving a total of 49 fellowships between 1999 and 2013—more than any other university in the country.