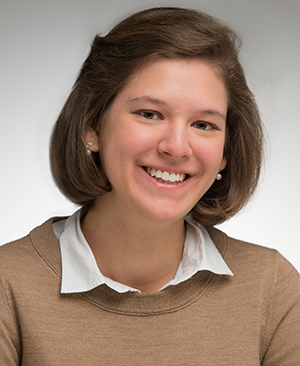 Davis has focused her studies on global migration and the politics of language—topics she hopes to explore further in a senior thesis project and eventually in graduate school.

Her interest in immigration issues began in high school, she said, and continued to develop during a summer internship with Catholic Charities USA in Washington, D.C. after her freshman year.

“It was a summer of huge debates around immigration reform,” she said. “So, in my internship, I did research on the issue and made briefs and fact sheets on different congressional districts and on the immigrant population overall in the United States to help lobby for reform.”

Davis, who is also a Hesburgh-Yusko scholar, studied Spanish in high school and continued to pursue the language at Notre Dame. After taking a class in post-Soviet Russian film “on a whim,” she decided to study Russian as well. 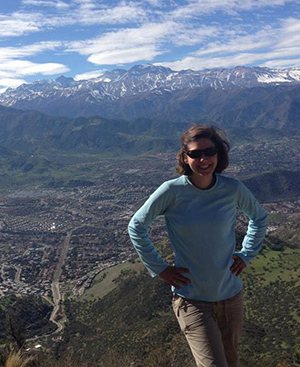 With funding from Hesburgh-Yusko and the Glynn program, Davis participated in an intensive Russian language program in Latvia last summer. It was a decision that became a turning point in her academic career, she said, causing her to look at immigration issues on a global scale.

In Latvia, she conducted research on the dynamics of migration, population studies, and demographic changes in the Post-Soviet space.

“It’s really interesting to see how a lot of countries have tried to reconstruct their identities after the fall of the Soviet Union,” Davis said. “I wanted to see how that played out, and some of the things I observed there inspired me to do further research.”

After her summer in Latvia, Davis had only a few days to prepare before heading to Chile for a semester abroad. There, she took political science classes and continued to develop her Spanish language skills. Not wanting to forget the Russian she had learned, however, Davis went to the cultural center of the Russian embassy to see if she could take Russian classes as well.

While in Chile, Davis took Russian classes in Spanish, essentially developing skills in her third language through her second.

“It was a completely strange experience,” she said, “but it was definitely one of the coolest things I did in Chile.”

Davis credits the Glynn Family Honors Program with connecting her to faculty members who have supported her throughout her time at Notre Dame.

“I think Glynn does a fantastic job of giving students access at the very beginning to some of the greatest professors at the university,” Davis said. “Coming in as a freshman and jumping in to those challenging classes really helped us connect with professors and build those mentor relationships that are an important base for your Notre Dame education.”

Paul Weithman, The Glynn Family Honors Collegiate Professor of Liberal Studies, has been one such mentor to Davis. After taking his Contemporary Political Philosophy class, she decided to add a minor in Philosophy, Politics and Economics (PPE).

“Professor Weithman takes a really keen interest in his students,” Davis said. “I would come in to talk about ideas, and we would have really thoughtful conversations. He has reached out to students, including me, to help us figure out research interests, study abroad plans, or fellowships. He wants to be there for us, helping us think about education and career goals on a holistic level.”

For Davis, it was that holistic approach to education that drew her to Notre Dame in the first place.

“I think one thing that really struck me about Notre Dame is that it’s an amazing institution academically, but here, you’re not your GPA; you’re not your SAT score,” Davis said.

“I really value the faith aspect of life at Notre Dame, the sense of community here, and the knowledge that the University is concerned with students’ overall wellbeing. It’s a place where I can grow as a person in a complete way.”