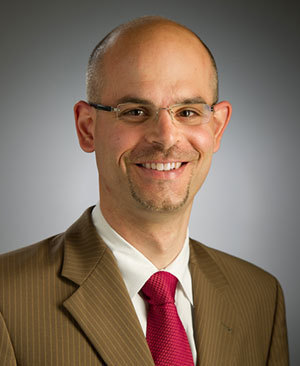 There was this old German documentary that played on television all the time in the 1980s. Tobias Boes often watched it as a child.

Back then, he remembers being in awe of the scenes in which the filmmakers fly over vast expanses of the African landscape, observing herds of exotic animals.

A few years ago, he decided to revisit that film, Serengeti Shall Not Die. This time, he saw something different—something that prompted him to write an article that won him the German Academic Exchange Service (DAAD) Article Prize for best article published in the journal German Studies Review in 2013-2014. He received the award at the annual meeting of the German Studies Association late last year.

Boes, an associate professor of German in Notre Dame’s Department of German and Russian Languages and Literatures, wrote about how the film is a microcosm of Western value systems that are meant to advocate for a greater good, but often wind up disregarding or marginalizing certain groups of people.

“It was a very problematic film in ways that I didn’t understand as a child. The film argues that we need to focus on larger global solutions to the world’s problems,” he said. “We do have truly global issues, but the problem is that when we try to imagine them on a global scale, it is easy to forget that we are a connected network of individuals, communities, and countries. It is easy to lose sight of the issues that are important to each of these.”

In the 1959 film, which won the Oscar for best documentary feature, director Bernhard Grzimek and his son travel to what was then the British colony of Tanganyika to survey wildlife populations in the Serengeti that were being threatened by poachers.

They push for a nature park, but at the same time suggest that national independence for Tanganyika (which would become the nation of Tanzania in 1961) would do irreparable harm to the local animals, because indigenous Africans would not properly protect their natural treasures.

“They’re advocating for these animals, but at the same time they’re denigrating the native people,” Boes said. “All the while, they completely ignore that poaching and all the other problems in the Serengeti only came about because of colonialism—including German colonialism, because the area was part of German East Africa prior to the First World War.”

In addition, Boes argues that the iconography of the film—the expansive aerial views, some from heights that make the Serengeti seem like an endless expanse—are precursors of later photos of the Earth taken during the space race. Those photos, which harken feelings of the Earth being a small planet in the vastness of space, would lead to the modern-day environmental movement.

That movement, Boes says, sometimes employs a similar philosophy to the one that Grzimek uses in the film. While the overall good of the planet is important, it comes at a greater cost for some countries than others, and Boes says those individual needs should be taken into account when addressing global issues.

The award comes at a time in which Boes’ academic department at Notre Dame is evolving, focusing not just on language and literature but on German Studies broadly and the impact of Germanic culture throughout history and in the modern world.

“The academic study of German culture in the United States is moving in an exciting new direction, and our department is moving with it,” Boes said. “My decision to write about a film focused on German attitudes towards nature is a part of that transition.”

Boes hopes to offer a course about German environmentalism for Notre Dame undergraduates within the next year. He is also working on his second book, The Representative German: Thomas Mann in American Culture, which is supported by a National Endowment for the Humanities fellowship.