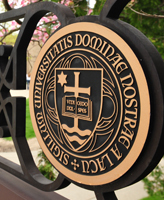 Four professors from Notre Dame’s College of Arts and Letters have been awarded American Council of Learned Societies (ACLS) Fellowships for the 2013-14 academic year.

Sponsored by the Andrew W. Mellon Foundation, the Ford Foundation, and the National Endowment for the Humanities, among other institutions, ACLS Fellowships serve as salary replacement for professors who wish to conduct six to 12 continuous months of full-time research.

The competition these fellowships is fierce, notes Ken Garcia, associate director for the College’s Institute for Scholarship in the Liberal Arts. The ACLS received 1,121 fellowship applications nationwide and made only 65 awards—a success rate of only 5.8 percent.

“I am honored and thrilled to receive this tremendous help for my research,” says Hernández, who, in addition to the ACLS fellowship, has recently been awarded a Career Enhancement Fellowship from the Woodrow Wilson National Fellowship Foundation and a fellowship from Harvard’s Loeb Classical Library Foundation.

The ongoing scholarship of the College’s faculty has a strong record of attracting research funding from private foundations, corporations, and the federal government. Over the past decade, the number of faculty who have received major national fellowships in the arts, humanities, and social sciences places Notre Dame among the top six universities in the nation.