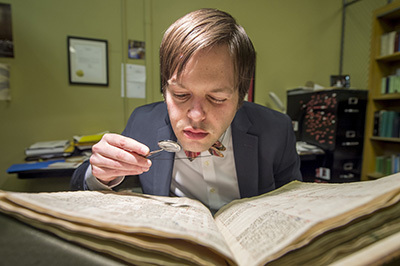 Sacred Music at Notre Dame: The Voice of the Text, an exhibition in the Hesburgh Libraries Department of Rare Books and Special Collections, highlights the University’s holdings in medieval liturgical manuscripts that contain music.

“The liturgy, Mass, acts of devotion—you can see how they were transmitted through time,” said David Gura, curator of ancient and medieval manuscripts in the Hesburgh Libraries’ Department of Rare Books and Special Collections. “You can see how the liturgical practices of today have changed, and you can see how much is still  the same.”

Manuscripts in the exhibition date from the 11th through 15th centuries and originate from various regions in France, Germany, Austria, and Italy. The remarkable thing to consider, Gura said, is that these manuscripts were used by people who lived centuries ago.

In the exhibition are examples of liturgical manuscripts, including a psalter—a volume containing the Book of Psalms and other devotional material, such as a liturgical calendar and a litany of the Saints; a gradual—the principal book used by the choir in the medieval Mass; the Office of the Dead, recited for the deceased to reduce the time souls spend in purgatory; and a diurnal, a book containing offices for the daily hours of prayer. 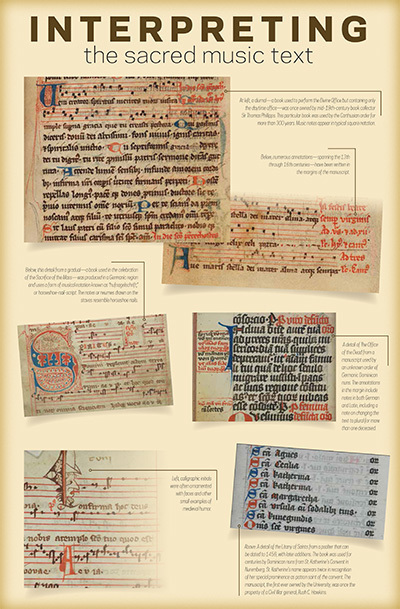 The materials on exhibit at the library include the first manuscript Notre Dame ever acquired—one of two German psalters owned by Rush C. Hawkins, a lawyer and Union general in the Civil War as well as a book collector.

Other manuscripts in the collection have been acquired within the last five years—a collaborative process for the library, said Gura, a concurrent assistant professor in the Medieval Institute.

“We are always developing sacred music holdings in support of the Sacred Music Program,” an interdisciplinary research and teaching program that trains musicians for work in churches, universities, and artistic organizations around the U.S. and worldwide.

Gura consults on potential additions to the collection with others, including Margot Fassler, the Keough-Hesburgh Professor of Music History and Liturgy; and Peter Jeffery, the Michael P. Grace II Chair in Medieval Studies, a professor of musicology and ethnomusicology.

When the Medieval Academy of America held its annual meeting at Notre Dame in March, Alexander Blachly—professor of musicology and director of the Notre Dame Chorale and Schola Musicorum—transcribed music from the manuscripts, which was performed at the conference.

Gura’s goal, he said, is to include audio clips of the music being chanted, so visitors can hear the notes they see on the page being sung.

The collection is widely used, as well—Gura teaches as many as 70 class sessions a year on the manuscript collection for students in art history, Irish studies, Italian, French, theology, medieval studies, English, and courses such as book arts—the technology of binding.

Also of considerable interest to scholars of medieval legal history are a set of deeds, writs, and other materials—including one series that details the 300- to 400-year history of a plot of land.

The exhibit runs until July 21 in the Special Collections exhibit space, 102 Hesburgh Library.