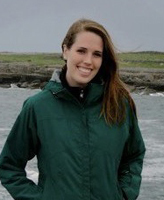 College of Arts and Letters students made a strong showing at Notre Dame’s 5th annual Undergraduate Scholars Conference, which showcased more than 250 research, scholarship, and creative projects from across the University.

Maloney’s winning senior thesis, “God-Daughter of a Witch and Sister to a Fairy: Pamela Colman Smith and the Celtic Twilight,” was advised by Kathleen Pyne, a professor in the Department of Art, Art History, and Design. 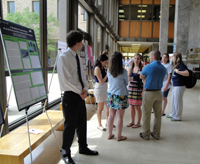 Vienna Wagner, a first-year student, won the award for best paper submitted from a 20000- through 40000–level class. She wrote “Mark of Cain: Evil’s Medieval Masquerade,” for a course called The Bible and Its Interpretation, taught by adjunct instructor Eric Bugyis in the Program of Liberal Studies.

Kristyn Jeffries, a senior in the College of Science, won second place in that category for “Eleanor Clubs: Black Cooks, White Kitchens, and Political Conflict in the Depression Era American South,” a paper she wrote for a course called Labor History of American Food, taught by Daniel Graff, director of undergraduate studies in the Department of History.

The award for best paper submitted from a 10000- or 20000-level class went to first-year student Julianne Carson. She wrote “How Far is Too Far? Stem Cell Research & Ethics” for a Writing and Rhetoric course taught by graduate instructor Robinson Murphy, a Ph.D. candidate in the Department of English.

First-year student Emily Mediate won second prize in that category for “Justification for the Impeachment of Andrew Johnson: Divisions after the War,” a paper for a University Seminar course taught by Richard Pierce, John Cardinal O’Hara, C.S.C., Associate Professor of History and chair of the Department of Africana Studies.

Entries were evaluated by a cross-disciplinary group of faculty members and representatives from the Hesburgh Libraries. They selected the winners based on the following criteria: