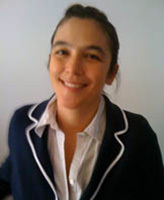 “It’s overwhelmingly exciting that Joyelle is the first winner of this much-anticipated award,” says Associate Professor of English Romana Huk, who knew the late Leslie Scalapino, and called her “a leading figure” in the U.S. avant-garde movement since the 1970s.

Administered by The Relationship theatre company, the award was created to honor the memory of Scalapino, her body of work, and her commitment to the community of experimental writing and performance. It seeks to encourage women writers who are taking risks with the playwriting form by offering the opportunity to gain wider exposure through readings and productions.

McSweeney’s play was selected from among nearly 400 entries.

“I am so honored to receive this award, because I have been influenced by Scalapino,” she says. “That was what prompted me to write a play for this contest. But also, it is such an honor to be part of this groundswell of creative energy to mark her place in the world.”

The prize announcement describes McSweeney’s play as “savvy, deft, funny, and truly contemporary—a vision of the 21st century, where secrets, language, internet, and the human cell run wild and collapse together along with justice and history.”

According to McSweeney, Dead Youth, or, the Leaks is an “inverted version of Shakespeare’s The Tempest.” She says she sees the play as a “bladed farce.”

“I think farce always has an edge; farce is always a weapon,” she says. “The goings-on are quite zany, but the themes are quite serious—the themes of violence, vulnerability, exploitation, illness, and technology.”

McSweeney says her inclusion of actual historical figures such as Henrietta Lacks and Julian Assange in a “flexible space”—a reimagined magical setting—is directly influenced by Scalapino.

“Scalapino’s very political work was the idea of empathy and personhood and reimagining what a person was,” she says.

As part of the award, the play will be published by Litmus Press and received a staged reading by Director Fiona Templeton at the New Ohio Theatre in New York City on October 14.

“It’s a great gift of Fiona’s time, her ideas, and her energy that she staged this reading of the play,” McSweeney says. “And really, the gift is to Leslie Scalapino, an author who died too young and inspired so many writers like me to try to make new shapes, both on the page and on the stage.”

Scalapino and McSweeney have much in common, Huk says. “Leslie’s performance writing was courageous, mind-changing and intense—witty and smart, too; and her work in the community of writers was generous and generative in so many ways, through the running of O Books, for example, and the charity Poets in Need.

“Joyelle, like her, takes writing to edges that frighten, thrill and illuminate; and she too is a leader—supporter, publisher, internationally attuned promoter—of her generation of innovative artists.”

McSweeney is the author of eight books of poetry, plays, and short stories. Her most recent works include Salamandrine: 8 Gothics and Percussion Grenade. Together with Johannes Göransson, assistant professor in the Department of English, she is co-founder of Action Books and Action, Yes, a press and web-quarterly for international writing and hybrid forms.

“That the great Fiona Templeton directed Joyelle’s award-winning work is just the next thrill in what I expect to be a career that exceeds all our expectations,” Huk says.