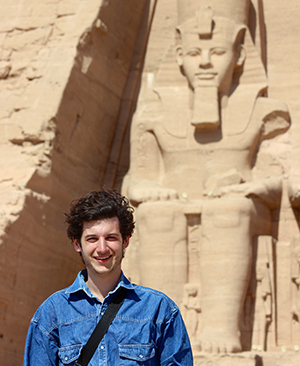 He took a train past the Arctic Circle to meet the only living Finnish rune singer. He interned in Paris at the Shakespeare and Company bookstore and participated in its renowned writers’ group. He taught English courses at Al-Azhar University in Egypt. He ventured to New Zealand to research Maori folklore and literature.

All during his four years in Notre Dame’s College of Arts and Letters.

“I had this realization that my time on this earth is limited—and my time in college is even more limited,” he said. “And although you can explore throughout your life, college is this small, beautiful period of time when you are free to delve into any idea that you can imagine or find interesting.

“I think it’s important for students to realize that Notre Dame wants you to do these things. Notre Dame wants to help undergraduates pursue their ideas and explore the world. I think that’s a huge part of what getting an education really means and what it should look like.”

A Mosaic of Interests

A native of Quincy, California—a rural farming community of 5,000 people—Hagwood describes himself as “the last person you would expect to find at Notre Dame.” While the University was always his “dream school,” he arrived for his freshman year full of uncertainty.

But Arts and Letters faculty—especially Associate Professor Dan Lindley in the Department of Political Science—made him feel at home.

“He taught me how to be successful here and encouraged me to pursue various opportunities,” Hagwood said. “He put me in touch with the right people, and he always believed in me. I ended up doing work I never thought I could have done.”

While he loved all of his Arts and Letters courses, it was a class with Associate Professor Romana Huk that inspired him to major in English.

“What is so great about Arts and Letters is that I’ve always had a mosaic of interests in terms of scholarship—from history to political science to anthropology to English,” Hagwood said. “English has been the best fit for me because it transforms all these theories into art and storytelling. It’s a great synthesis of everything I’m interested in.”

Throughout his first and second year, Hagwood conducted research on digital humanities with Assistant Professor Matthew Wilkens—an experience he said laid the foundation for the rest of his undergraduate career. With the support of an American Dream grant from the Institute for Scholarship in the Liberal Arts, he spent a summer on campus, researching post-modern American literature and film.

When Hagwood headed to the University of Oxford for a yearlong study abroad program, his Arts and Letters experience prepared him to take on the school’s rigorous curriculum.

“Notre Dame really set me up to succeed at Oxford—and in any research I do,” he said. “The faculty are always willing to talk with you and mentor you—which was so important in making me feel comfortable in the one-on-one setting with an Oxford tutor, as well as when I was crafting my own research projects or looking at graduate classes.”

During breaks at Oxford, Hagwood didn’t slow down. He headed to Paris to work in the Shakespeare and Company bookstore—where employees sleep in the shop and attend writers’ groups during off hours.

And, he traveled to Finland to fulfill a longtime dream—interview 90-year-old Jussi Huovinen, the last surviving Finnish rune singer.

For thousands of years, Finnish history had been told through song, but the tradition began to die out after World War II. Huovinen is the only person alive who has the entire saga, called the Kalevala, committed to memory.

“When I was 10 years old, I saw a documentary on him,” Hagwood said, “and I remember thinking ‘I have to go to Finland to find this guy and hear his music before it’s gone.’ I took a plane to Helsinki and then a train six hours north. I found Jussi and spent a couple of days with him, recording his music. It was a beautiful experience.”

A Series of Adventures 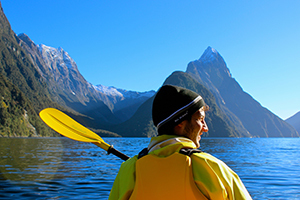 Hagwood’s passion for literature and culture led him from the Arctic Circle to the south island of New Zealand. The summer after his junior year, he was awarded a grant from the Undergraduate Research Opportunities Program (UROP) to research folklore of the Maori—a vibrant, indigenous culture in New Zealand—at the University of Canterbury.

“While I was at Oxford, I began thinking about the fact that we primarily focus on English and American literature in our studies, and I wondered why that bias exists,” Hagwood said. “South Africa, Australia, and New Zealand are Anglophone countries. I wanted to know what other voices I was not incorporating into my knowledge of the canon of English literature.”

His adventures didn’t stop there.

Hagwood also found time to work with a Fulbright scholar at Al-Azhar University in Cairo, practicing the Arabic he had studied at Notre Dame. Through the Kellogg Institute’s International Scholars Program, he researched the West African nation of Mali and the impact of Islamic radio. And closer to home, he had internships with his hometown district attorney’s office and the U.S. Forest Service, where he conducted archaeological work in the Sierra Nevada mountains.

At Notre Dame, Hagwood has written for Scholastic magazine and the student newspaper, The Observer, and participated in student films, theatre productions, the Not-So-Royal Shakespeare Company, and the Notre Dame Literary Festival.

“Within English as a language, there are so many different rhythms, patterns, and ways people have to express themselves,” he said. “I think my English major has really taught me to listen to those rhythms and what those voices are trying to convey. And it inspired me to really want to share and document that—to make those voices come alive in a new way, whether through film and theatre or a news story.”

For Hagwood, the journey from nervous first-year student to seasoned world traveler and researcher began with a simple conversation.

“It starts by sitting down with a professor, talking about yourself, and talking about the world,” he said. “If you have an idea you need to explore that you find exciting—one that will help you have a more complete answer to the question of what it means to be human—then find a professor who is equally excited and they will be happy to work with you.