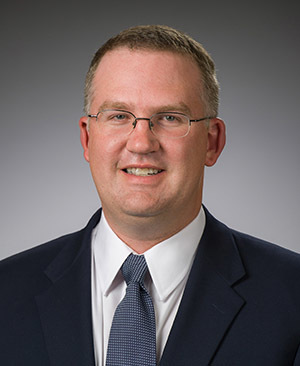 Ask 10 macroeconomists why we have recessions and you’re likely to get 10 different answers. This lack of consensus might seem frustrating, but for Eric Sims, Michael P. Grace II Associate Professor in Notre Dame’s Department of Economics, it’s also exciting.

“There are lots of fundamental questions that we just don’t have a firm grasp on, and there is a lot of work to be done,” said Sims, whose research focuses on business cycles—the fluctuations of GDP, labor input, and unemployment, for example. “There is a surprising amount that we don’t know about the business cycle.”

Much of Sims’ past work has focused on identifying the sources of these fluctuations, particularly the role of news and uncertainty about the future. While he continues to work in this area—including an ongoing paper with colleague Michael Pries and former graduate student Julio Garin on the role of sectoral versus aggregate shocks—Sims’ recent research concerns aggregate economic policy.

In a series of projects, Sims and former graduate student Jonathan Wolff are addressing questions like: What are the macroeconomic effects of changes in government spending or tax rates? Are they larger in a recession? What are the effects on economic welfare, and how do they vary in a recession?

“We’ve come up with some interesting answers so far,” Sims said. “While we find some evidence that changes in government spending, for example, stimulate output more when the economy is in a recession, it isn’t necessarily the case that there is a bigger increase in economic welfare from an increase in government spending when the economy is depressed.”

Sims also has been working in the area of monetary policy, including a paper that looks at what kind of measure of economic activity central banks should focus on. In it, he argues that they “shouldn’t pay too much attention to the economy’s potential output.”

Another project with Louis Phaneuf from the University of Quebec at Montreal and Guido Ascari from Oxford University explores the effects of trend inflation rates for welfare and macroeconomic performance. “We basically come down on the side that higher long-run rates of inflation can be quite costly, which provides a cautionary warning for recent proposals to raise long-run inflation targets as a tool to help lift the economy out of its recent doldrums.”

The paper is related to Sims’ forthcoming paper in the American Economic Journal: Economic Policy with new Notre Dame colleague Ruediger Bachmann and Tim Berg about how inflation expectations correlate with spending attitudes. Sims also plans to work on a project with Wolff and Bachmann related to the “austerity” trend—governments enacting plans to reduce their outstanding debt.

“One question is how governments interested in reducing debt should focus their efforts between spending cut and tax increases,” Sims said. “There is also a dynamic dimension—do you want to cut spending and raise taxes now, promise to do so in the future, or some combination of the two?”

In the classroom, Sims said he is constantly “tinkering” with ways to reach students and explain macroeconomic models and concepts. This past semester, Sims added a section to his intermediate macroeconomics course on income inequality.

“It was a simple framework, but I think it was useful for students to think about these issues.

On the one hand, people being relatively more different from one another opens up more possibilities from gains from trade. For example, if you cut lawns for a living, more rich people who want to pay for their lawns to be cut can only make you better off by raising your wage, Sims said.

On the other hand, he said, because we assume that there is diminishing marginal utility to consumption, as a society we would nevertheless probably like to do some income redistribution. This involves tradeoffs related to raising taxes, etc.

“I didn’t try to provide any concrete answers, but rather to expose students to the issues and give them a framework to think about it on their own.”

Sims said Notre Dame has provided a supportive home for both his work and his Catholic faith. “There are so many spiritual resources available on a daily basis…and the economics department is really a big family. Every day I come to a place full of people who care about each other and enjoy being around each other. It’s fun.”