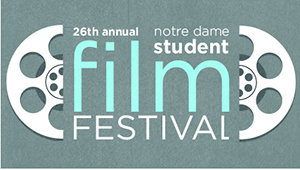 The University of Notre Dame’s Department of Film, Television, and Theatre (FTT) announces the 26th Annual Notre Dame Student Film Festival, in the Browning Cinema at the DeBartolo Performing Arts Center, January 29 through 31, 2015.

As in recent years, audience members are invited to vote for their favorite film via text message. The Audience Choice Award will be presented to the student director(s) of the winning film after the final screening. Last year’s Audience Choice Award winner, The Suicide Disease, went on to win Best Short Documentary at the Sunset International Film Festival in Los Angeles.

An annual launching pad for student filmmakers as they begin their careers in the film, television, and entertainment industry, the Notre Dame Student Festival has featured the first films of future award winners such as Peter Richardson (2011 Sundance Film Festival Grand Jury Award winner, How To Die in Oregon) and John Hibey (2012 Sundance Film Jury Award Winner for Short Filmmaking, Fishing Without Nets), as well as numerous others.

The festival screens films that were made by undergraduate students during the past year as class projects in the Department of Film, Television, and Theatre. Festival founder and FTT faculty member Ted Mandell says, “Honestly, I can remember every film from every year. Unfortunately, I can’t remember much else.”

The Way Things Were (10:20) Blake Avery, Zuri Eshun
A teenager’s stable world cracks when his desire for a college education forces him to confront the weight of his damaged family – and ultimately, his closest friend.

Much Ado After School (15:35) Brian Lach, Nicole Sganga
An ambitious afterschool program brings out the inner Bard in a group of South Bend students.

The Night Out (10:56) Mitchell Abraham, Zachary Ostapchenko, Weibo Chen
There’s a party at the house down the street….or is there?

Eat Ride Sleep (15:15) Mikey Nichols, Lauren Josephson
9-year old CJ Burford hears God’s call to ride his bike across America, with the family RV right behind him, and the media tagging along.

Metta Johnson’s Video Portfolio (8:18) Will Neal, Nick Desmone
Metta Johnson wants to be a big time Hollywood director. But he has no talent and no creative skills. Here’s proof.

Love Thy Neighbor (9:40) Bryan Daly, Jill Chipley
The girl next door is looking for love in all the wrong faces.

Isn’t It Pretty to Think So (16:56) John Rodgers, Carleigh Coyne
After a short stint in a rehab facility, Owen comes home to find that some things never change.

Curry & Erin (9:30) Eric O’Donnell, Maureen Gavin
Stricken with ALS, and blessed with a loving husband, a day in the life of Nashville artist Erin Brady Worsham is like no other.

J2K (12:15) Grace Carini, Hunter Speese
A dermatologist, a librarian, and a grocery store clerk. Not exactly the three wise men, but some pregnancies are just surreal.

PARKING: Ample free parking is available on performance nights and daily after 5:00 p.m. in a gated parking lot just north of the DeBartolo Performing Arts Center. An accessible lot for disabled patrons is available immediately adjacent to the center; a valid hangtag or license plate is required. There is a 10-minute parking zone on the north drive of the center for ticket pick-up; during inclement weather you are welcome to drop off guests in this area and proceed to parking. Off-campus (paid) parking is also available at Eddy Street Commons, just south of the center.

Notre Dame’s Department of Film, Television, and Theatre seeks to inspire intellectual inquiry and nurture creativity. The department offers both a scholarly and a creative context for the general liberal arts student at Notre Dame as well as those students seeking intensive preparation for advanced study in these fields. The hands-on nature of the curriculum, coupled with a very high degree of student-faculty interaction, provides students with a singular educational opportunity at a university known for its teaching excellence. The Notre Dame Student Film Festival is a direct outgrowth of the department’s academic program and an integral component of students’ artistic development.