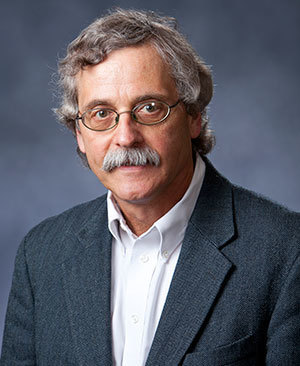 David Watson, the Andrew J. McKenna Family Professor of Psychology, was honored for those accomplishments and many others when the Society for Personality and Social Psychology presented him with the 2015 Jack Block Award for Distinguished Research in Personality.

The award recognizes the lifetime achievements of senior-level researchers and is the organization’s top honor for research accomplishments in personality psychology.

“It was a big thrill. It was a surprise,” Watson said. “It’s nice to get recognition that people think your work has had a positive effect in the field.”

Daniel Lapsley, professor and chair of the Department of Psychology, said Watson is a world-renowned researcher who has been an invaluable member of the Notre Dame faculty.

“David is arguably one of the most famous research scientists in all of academic psychology,” Lapsley said. “He is a renowned personality psychologist whose work has brought clarity to our understanding of how personality is structured and organized. There are few topics where he is not a distinguished expert.” 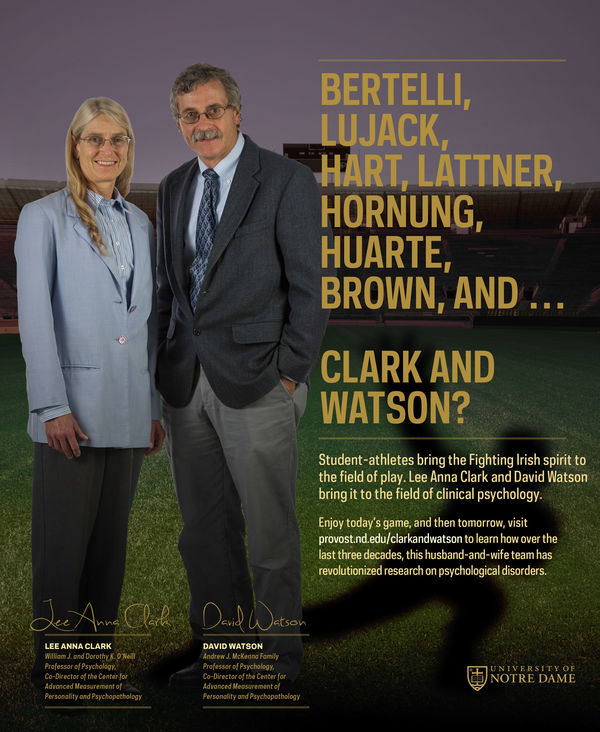 David Watson and Lee Anna Clark in a Notre Dame gameday program ad from 2014, when they were honored on the field for their research efforts.

Throughout his decades-long career, Watson has worked closely with his wife, Lee Anna Clark, the William J. and Dorothy K. O’Neill Professor of Psychology, who studies clinical psychology at Notre Dame.

They’ve frequently conducted their own research over the course of their 36-year marriage, but many of their professional projects have overlapped—including examining how people’s personalities can influence mental illnesses such as depression, anxiety, bipolar disorder, and substance abuse.

“We now know, in large part due to our work, that these two areas of psychology, which people traditionally have studied separately, are two sides of the same coin,” Clark said.

Similarly, when Clark and Watson were both in school, they were taught that someone suffering from depression experiences episodes of sadness, broken up by periods of feeling fine. But a person dealing with depression is rarely “fine,” Watson said.

Instead, their research together showed that different people can experience different levels of depression—that is, some people can feel sadder or gloomier than others— depending on their personalities.

“These are important outcome variables,” Watson said. “I thought it was important to show that personality really was important; that it had important implications for society, that it did allow you to predict significant, real-world phenomena.”

That discovery meant a new way was needed to measure an individual’s emotions. Clark and Watson wanted to be able to quickly assess how a person was feeling, so they developed the Positive And Negative Affect Schedule (PANAS).

The scale, which the pair (along with Auke Tellegen) created in 1988, asks subjects to rate how intensely they have experienced specific positive and negative feelings, such as excitement, enthusiasm, shame, or sadness.

According to the Encyclopedia of Clinical Psychology, Watson and Clark have created more than two dozen assessment instruments, but the PANAS is their most widely known and utilized.

The scale has been translated for use around the world, has been cited more than 19,000 times, and is a routine part of social, educational, evolutionary, and sports psychology.

Since coming to Notre Dame in 2010, Watson has been studying different areas of personality, this time looking at whether too much of a positive personality can be a bad thing.

The founding president of the Association for Research in Personality, Watson’s legacy is threefold, the lifetime achievement award selection committee said. He is an innovator, but he has also worked extensively to integrate normal and abnormal psychology and championed a dimensional approach to psychopathology.

“Historically, personality psychology has been closely tied to the study of psychopathology, and David Watson has carried on this tradition brilliantly,” the committee wrote.

“The magnitude of his influence is shown by his selection as editor of the Journal of Abnormal Psychology. David Watson has made important contributions to many topics in personality research, including the temporal stability of traits, health psychology, and personality and personality perception in couples.”