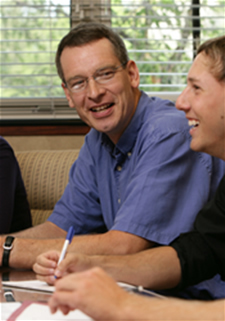 Drawn to the College of Arts and Letters because of its equal emphasis on scholarship and teaching, Associate Professor of History Brad Gregory downplays his talent for classroom instruction.

“It’s a vocation,” he says. “The most important thing that one has to do to be a successful teacher is to communicate that you care about teaching.”

Gregory memorizes the names of his students before the first class meeting, using photos available to every faculty member on the Web.

“This shows that I’m already caring about and taking an interest in what I’m there to do,” he says.

Gregory says that it’s also important for professors to show that they’re not just going through the motions of a job; he constructs his lectures so that they’re clear, coherent, and substantive. In return, he insists that his students be “on,” ready to take notes and ask questions, requiring that they sit so that he is able to see their eyes and judge their reactions to the material.

“Gregory was the perfect teacher for a small class,” says Kyle Karches (‘08), who took Gregory’s “Honors Humanities Seminar” as a first year student in the Glynn Family Honors Program. “Although the readings he assigned were challenging, he was always able to stimulate fruitful discussion without dominating the conversation. He also made the effort to get to know each of his students; not only did he hold ‘social hours’ in an on-campus restaurant every Friday, but he also invited the entire class to his home for a Christmas party.”

A historian of late medieval and early modern Christianity and of intellectual history in early modern Europe, he is also continuing work on his book, tentatively titled “Storming Heaven: Christianity in the Reformation Era.”