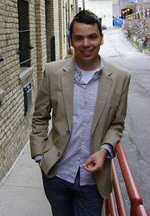 The Latin American Studies Association (LASA) will honor Jason Ruiz, assistant professor in the Department of American Studies, for his doctoral research at its upcoming annual conference.

Ruiz, who earned his Ph.D. from the University of Minnesota before joining Notre Dame in 2008, will receive the award for best dissertation in Latino studies from LASA’s Latino Studies Section. The University’s Institute for Scholarship in the Liberal Arts will fund his trip to the conference, which is June 11–14 in Rio de Janeiro.

For his dissertation, Ruiz focused on American travel to Mexico during the dictatorship of Porfirio Diaz in the late 19th and early 20th centuries and the increasing representation of such travel in American popular culture. He analyzed written descriptions and images culled from travelogues, stereoscopes, postcards, newspapers, magazines, and snapshots. The dissertation formed the basis for a book he’s writing.

“I argue that travelers and the discourses that they created framed Mexico as a logical extension of American economic—and sometimes territorial—expansionism,” he says. “I am particularly interested in the politics of race, gender, and sexuality in this process.”

This fall, Ruiz, who is also a fellow of the University’s Institute for Latino Studies, will teach a class on the U.S.-Mexico border in the American imagination, as well as a course on race and American pop culture.

Originally published by Josh Stowe at newsinfo.nd.edu on May 13, 2009.