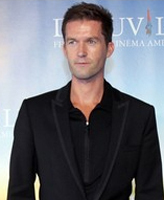 Author and ultra-marathoner Michael Collins ’87, ’91 M.F.A., at the Deauville American Film Festival in France, where he was awarded the 2011 Lucien Barriere Literary Prize for his novel Midnight in a Perfect Life.

Imagine you have just completed 26.2 miles of running, with legs like Jell-O, a headache, and worn-out lungs. Now imagine running that same marathon in the searing heat of the Sahara Desert or the blistering cold of the North Pole. That’s what Notre Dame College of Arts and Letters alumnus Michael Collins ’87, ’91 M.F.A. does.

And he doesn’t just compete in these races, or even just finish them; he wins them.

In addition to being an “ultra-marathoner,” Collins, who has a Ph.D. in English, is also a published novelist and playwright. His novels have been adapted into films and he has won numerous literary awards. In short, Collins has achieved his dream of becoming a full-time writer and a full-time runner.

Collins was born in Limerick, Ireland, and is a descendant of the Irish revolutionary of the same name. He lived in Chicago for a year around age 13, while his father was there working for the Irish government. Even after moving back to Ireland, Collins knew he wanted to return. He came to Notre Dame, a natural fit, on a running scholarship, and majored in English.

“We went back to Ireland, but having experienced America in 1978 and 1979, I saw it was so vastly different and free compared to Ireland,” Collins says. “Right around then was the height of the I.R.A. troubles, and when I went back home, I knew I wanted to come back to America. It was just a question of how.”

After completing his B.A. in English and M.F.A. in creative writing at Notre Dame and a Ph.D. at the University of Illinois-Chicago, Collins used his self-taught programming knowledge to get a job at Microsoft. He had tried to make a living as a writer but, even after some publishing success, he was disappointed by the lack of money to be made.

“I graduated and I wrote two collections of short stories that were published by Random House and Jonathan Cape (the British arm of Random House),” Collins says. “But there was no money in it. I was doing it for the love of it and I just became disillusioned with trying to be a writer and struggle and try to get published. Even getting published brought little money, so I took that job at Microsoft to try to have a normal life and not have to worry about money.”

Collins quit running competitively for a decade after graduating from Notre Dame. While studying for his doctorate, he was stabbed in the rough Chicago neighborhood he was living in and the incident forced him to examine his life.

“I could have been dead, so I decided that all the things I wanted to do, I should try to do,” Collins says. “I was making more money at Microsoft than anyone should be given because it was the beginning of the Internet revolution. I asked myself what I really wanted to do. Why give up on dreams, things that you want to do? I think that was all motivated by getting stabbed. I could have been dead.”

Collins wrote a novel, The Keepers of Truth, at night while working days at Microsoft. The novel was short-listed for the Man Booker Prize and won the Kerry Ingredients Book of the Year Award for Best Irish Novel. Collins’ literary career has rolled on since, with four more successful novels.

The stabbing also motivated Collins to get back into running. He found that he could still run quite well at a high level, finishing 28th in the Chicago Marathon months after the stabbing. He left Microsoft in 1997, and that same year he completed his first ultra-marathon, a 26.2-mile course called “The Last Marathon” on the Antarctic continent.

Since then, he has won the Everest Marathon Challenge in 1999, and what Collins self-titled the “Fire and Ice Challenge,” winning the Sub-Sahara Marathon and North Pole Marathon within a month of each other after recovering from surgery to heal stress fractures.

Collins has raised millions of dollars for charity through his ultra-marathons. Though one would think of a marathon as a competition against others, Collins says ultra-marathons are about competing against your own urge to stop.

“Someone drops you out of a helicopter, and it’s minus-40 degrees,” he says. “They provide you food and hot water, but the water is 40 miles down the road, and if you don’t make it you’re out of the race. Your hands are freezing, and you run out of food. You have your own compass, trying to navigate through 40 mph winds in the South Pole. You don’t even consider racing against other people. It’s just a battle against yourself.”

In 2010, Collins captained the Irish National Team at the World 100k (62.2 mi) Championships and led the team to a bronze medal. Collins, whose work draws deeply on his Irish background, was proud to represent his country.

“To be 47 years of age, to be the captain of the national team and go to the World Championships was amazing,” Collins says. “My Dad is in his early eighties, and my kids are growing up, so I’m able to share everything. There are always young guys that are faster, but they don’t have the mental stamina. At 40 miles, when you’re dying, if you keep going, chances are the guys that are faster than you, maybe 10 or 15 minutes ahead of you, will start walking and you’ll catch them.”

Collins is currently working on his master’s degree in literary theory at Oxford University. But out of all his accomplishments, Collins says he is most proud of graduating from Notre Dame and winning the 2008 Distinguished Graduate School Alumnus Award.

Despite all the awards and accomplishments, Collins says the competition isn’t what drives him. “I don’t want to be portrayed as super-competitive,” he says. “It’s more like a point of focus.

“The main thing is to take every opportunity and take advantage of it.”