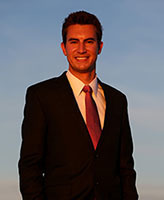 Small took a love of the sport—he turned down scholarship offers at Division II and III schools to attend Notre Dame—and applied it to his obligations as a member of the tournament’s executive council, work that ultimately led to him landing a job after graduation at NASCAR.

His sports marketing career has taken off. In 2012, SportsPro Magazine named Small one of 10 top sports executives under the age of 30. And in December, Small was appointed president of Iowa Speedway, a racetrack purchased by NASCAR last year. At 28, he is believed to be the youngest president of a major racing facility in the nation.

Small, an economics major, played sports his entire life, but it wasn’t until he came to Notre Dame that he started envisioning a career in professional sports.

“Once I began [working the Bookstore Basketball Tournament], I experienced the activation of a brand that I fully belonged to and believed in,” Small says. “At that point, it clicked. Since I was never going to compete in a sport professionally, I felt I could become a ‘professional’ on the administrative side.

“This experience strengthened my inclination, and I approached it as if it was my ‘second major’ at ND,” he says.

His other experiences at Notre Dame have helped him so far in his career as well. During his senior year, Small and his roommate sold tailgating T-shirts to other students.

“This was an incredibly valuable experience, as we learned how to market a product through grassroots efforts, which at the time included Facebook,” Small says. “We also learned how to produce and manage inventory and create a good customer experience. While it was a very small and inefficient operation, we were able to generate a profit and learn a lot.”

“At the Irish Guard, when asked about our experience, we typically first answered with, ‘We had to be perfect in front of millions of fans,’” Small says. “This is how we approached our role in game day festivities and was very influential in shaping my approach to sports marketing and entertainment.

“While perfection is almost impossible to achieve, it is a goal worth pursuing,” he says. “In sports marketing and entertainment, we must make every effort to produce and serve a product that our customers value highly.”

While Small had a number of opportunities to work in sports marketing following graduation, he had his eyes on one sports property—NASCAR.

“That’s where I wanted to professionally cut my teeth,” Small says. “In terms of sports marketing, it doesn’t get any more potent than in NASCAR. This sport is, and has been, on the bleeding edge of sports marketing since its inception.”

He had a phone interview with NASCAR in the fall of 2007, and when he hadn’t heard anything back by Christmas, he and his father, Jim Small—senior director of marketing and communications in Development at Notre Dame—decided to spend spring break in Daytona Beach, Fla., where the agency’s headquarters are located, trying to get an in-person interview.

“We were successful in securing the interview, but again, I didn’t hear anything from NASCAR—until the week of finals,” Small says. “I got a call from their HR department, notifying me of an entry level position that would soon be open. They asked me if I could fly back down to Daytona Beach during Senior Week.

“I changed my plans to head to Cedar Point that week and instead hopped on a flight to Daytona Beach,” he says.

Small got the job, and he worked for two years as an account executive and then for three and a half years as a senior manager for team services.

On a Monday afternoon last fall, Small received a phone call from NASCAR Chairman and CEO Brian France, who told him NASCAR would likely acquire Iowa Speedway and that he wanted Small to run it. Small went to Daytona Beach to get caught up on the acquisition and made a number of undercover trips that fall to the speedway.

“Since this was completely confidential, I had to be very careful in my approach,” Small says. “All of my NASCAR apparel and luggage had to be replaced on these trips, which was not easy. Any questions about my identity and purposes for my trips had to be strategically managed.”

While in Iowa, Small told people he was an insurance salesman or an account manager, and he had to avoid the media as much as possible to avoid inadvertently leaking the news of the sale.

“Late in the process, there was even a day that I couldn’t go into the offices at Iowa Speedway because the local media was surrounding the building,” he says.

That September, Small received the phone call from France, officially offering him the Iowa Speedway job.

“My heart began pounding so hard and seemingly loud, I could barely hear him on the other line,” Small says. “Brian continued on, speaking about the character of the speedway, the staff, the fans, the region, and the state. At that point, I was ready to say ‘Yes!’ and probably even get an Iowa Speedway tattoo, but as he wrapped up the phone call, he suggested I take the rest of the week to make the decision.

Small wants to develop Iowa Speedway into a world-class entertainment destination, and he plans to make reforms to the speedway’s culture.

“We want our fans to be eager with anticipation as we approach each event, and then smiling from the moment they arrive until the moment they leave us,” he says. “We even hope to create an experience that they don’t want to leave.”

For Small, it all comes back to Notre Dame.

“Looking back now, attending and graduating from Notre Dame was more than just an accomplishment,” he says. “It shaped my life and career, and was an opportunity to dream even greater. I’m so proud to be an alum, and am even prouder of the work it prepared me to accomplish.”