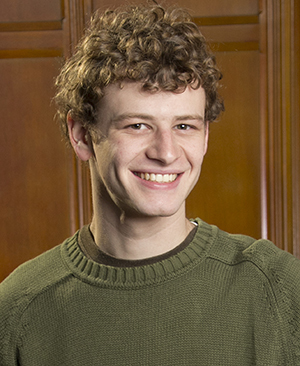 As a Notre Dame undergraduate, Thomas Mann ’14 was not always sure what career path he wanted to follow.

That’s why his liberal arts education was so valuable, he said, because it gave him the freedom to explore different disciplines and find his niche. Mann, who was a scholar in the Glynn Family Honors Program, majored in Spanish, Arts and Letters Pre-Health, and sociology. It was in his Spanish coursework, he said, that he found his passion.

“In college, Spanish takes a turn from being language-focused as it is in high school to being very literature-based,” he said. “I really enjoyed the literature aspect of it and that is what inspired me to further my studies in the language.”

Mann is now pursuing a graduate degree in Iberian and Latin American literatures through Notre Dame’s B.A./M.A. program. After completing the program, he hopes to travel to South America and teach English there.

“I am really looking forward to building on my previous study abroad experience and continuing to improve my Spanish skills,” he said.

Mann said one of his most memorable experiences as an undergraduate at Notre Dame was studying abroad in the fall of his junior year in Puebla, Mexico. In particular, he said the opportunity to live with a host family gave him a deeper understanding of the country.

“Culturally, I came to understand Mexico in a way that you just can’t without being there,” Mann said. “There is such a rich history there. We were right in the heart of Puebla, which is where La Conquista happened.

“To have learned that history in my Spanish classes and to be where it all happened was really cool.”

In fact, one of the courses that most influenced him, Mann said, focused on La Conquista—the conquest of the New World. Taught by Associate Professor Carlos Jáuregui, the Survey of Spanish American Literature examined the diaries of Christopher Columbus and Hernando Cortés.

“We read a lot of important works from the time of the earliest Hispanic influence in Latin America,” Mann said. “And I think it was Professor Jáuregui’s enthusiasm that set the class apart for me.

“He has incredible energy and his classes are challenging. He definitely sets the bar high for his students, but it’s a bar that can be met. And, in meeting that bar, you learn so much.”

Through La Casa, Mann worked during the summer after his junior year at a camp for elementary school children, which focused on legends and folk tales from Latin America.

“It was so valuable to me to see another side of South Bend that is so distinct from the world that we live in here on campus. To be able to participate in that community was wonderful.”

That internship, in turn, inspired him to undertake a senior thesis project combining his sociology and Spanish majors.

“My thesis examined Latino assimilation in South Bend, and particularly how La Casa de Amistad influenced that process,” he said. “It turned out that they have a very balanced approach to helping families assimilate into mainstream American culture while maintaining their ethnic identity.”

As he conducted in-depth interviews in English and Spanish, Mann said he appreciated the opportunity to build relationships with the participants—relationships that continued throughout his senior year and beyond.

“I had already established a connection with the Latino community in South Bend through my internship,” he said, “and the thesis gave me room to further that conversation.”

What It Means to Be Human

As Mann looks at his education in the College of Arts and Letters, he said that the liberal arts have shown him “what it means to be human and to participate in all that humankind has done.

“In my Spanish studies, we explore all that people have accomplished through history, in the political realm, and in the literary world as well,” he said.

“So, to me, the liberal arts are about participating in that cultural development—about being educated in what has come before and then continuing that process.”