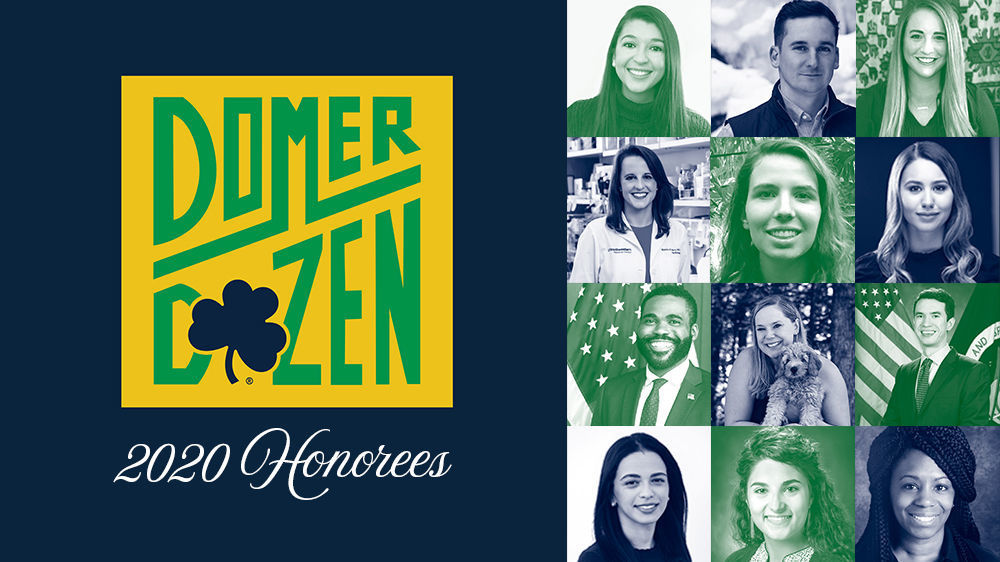 The Notre Dame Alumni Association announced its second annual Domer Dozen cohort, honoring 12 graduates ages 32 and younger for significant contributions in their fields, as well as in service to others. Four of the young alumni are from the College of Arts & Letters.

The Domer Dozen program is the signature initiative of YoungND, the Alumni Association’s newest affinity group. The 2020 honorees include alumni who have excelled in health care, childhood education, international aid, faith, cultural advocacy, gender equity, and space exploration, among other areas. They were chosen by a selection committee consisting of the YoungND board, University officials and Alumni Association staff, who reviewed more than 140 nominations this past fall and evaluated them based on a weighted ranking system and the nominee’s dedication to at least one of the four core pillars of the association’s mission — faith, service, learning and work.

“I never cease to be amazed by the extraordinary impact our young alumni have in their communities and respective industries,” said Dolly Duffy, executive director of the Alumni Association and associate vice president for University relations. “Our newest Domer Dozen honorees continue to prove this point. Their accomplishments as innovators, faith leaders, educators, advocates, engineers, and diplomats are truly remarkable, and I know this is just the beginning of their positive influence on the world.”

Abdel-Rahim, who majored in political science and Arabic, is an associate at Booz Allen Hamilton in Washington, D.C. She is also the co-founder of Tables Without Borders, which provides opportunities for refugee chefs and those with interests in the culinary arts. The organization pairs refugee chefs with notable restaurants in Washington, D.C., where they are able to develop their culinary talents, build networks, and receive reliable pay and supports them as they seek jobs or open their own restaurants. Tables Without Borders seeks integration by celebrating each chef’s heritage and highlighting the traditions and tastes of their home countries.

Garry, a cardiovascular physician-scientist at the University of Texas Southwestern Medical Center, majored in American studies and Arts & Letters pre-health. She is researching the regeneration of the injured heart, while treating patients suffering from heart disease. Garry studies a process called cardiac reprogramming, whereby scientists can force scar cells into functional heart cells in an attempt to therapeutically cure heart failure — and has discovered a protein that potently increases the conversion of human scar cells to functional heart cells.

Katarina Goitz ’16, ’18 M.A.: An inspiration to a deeper connection with faith

Goitz majored in Chinese and went on to receive a masters in theology from Notre Dame’s Echo program. She worked as a youth minister for six churches in Galveston, Texas, for 10 months, before she was tragically killed by a hit and run driver while leaving Notre Dame after an Echo reunion in June 2019. Although humble, her acts of compassion — such as giving the shoes on her feet to a homeless woman — moved many throughout her life. Father Jude Ezuma of Galveston said “she infused vigor in the program through her gentleness, piety, kindness, hard work, dedication, and love of God.” Her work continues in the form of a blog, Katarina Lives On, which includes daily Bible readings, and through a nonprofit foundation, the Katarina Goitz Foundation for Youth and Young Adult Ministry.

After graduating summa cum laude with majors in Spanish and psychology, Tow joined Teach for America and moved to California, where she has spent the majority of her career serving low-income, predominantly Black and Hispanic populations in East Oakland. She spent four years as a TFA educator before joining the TFA staff and working directly with teachers to improve outcomes for ESL students and their families. After stints in the REALITY Revolve program took her to classrooms in Israel, Tow returned to California, where she is now an assistant principal of instruction (and the only bilingual administrator) at Monarch Aspire Public School in East Oakland. She is frequently consulted by educators for her insight and knowledge of culturally relevant instruction, educating English learners and newcomers, interrupting the school-to-prison pipeline, dismantling systemic oppression in schools, and providing high-quality education during a pandemic.

The remaining honorees are:

The Domer Dozen honorees gathered virtually for an awards show celebration on Tuesday. For more information on this year’s honorees, visit domerdozen.nd.edu and follow YoungND on Instagram.