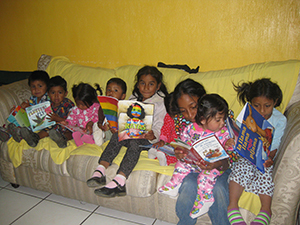 “The love of charity is the form of faith.” Though Thomas Aquinas penned these words, Anne Attea ’86 has certainly lived them.

For the past year, Attea has been the director of el Hogar de Niños del Amor de Patricia, a home caring for abandoned, abused, and neglected children in Guatemala. Attea and her team provide these children with love and stability, as well as food, shelter, clothing, medical and dental care, music, fun, and education.

While Attea’s work as director of El Amor de Patricia is especially significant at this point in her life, serving in Guatemala is just the most recent chapter in her commitment to share her faith and gifts with the Latin Americans with whom she has had the privilege to live and work.

Attea’s connection with Latin America and her commitment to social justice developed at Notre Dame, where she majored in theology and microbiology. As an undergraduate in the midst of the liberation theology movement, she formed an awareness and compassion that she further enriched through her involvement with service projects such as the Urban Plunge and the Summer Service Learning Program offered by the University’s Center for Social Concerns.

After graduation, Attea went to visit her uncle, a priest working in Lima, Peru, and a Notre Dame classmate who was working in Santiago, Chile. Her experiences during these visits inspired her to seek a volunteer opportunity in Latin America.

“I was completely blown away from the hospitality I received on my visit. I didn’t speak any Spanish at the time, just a few words here and there, but the people I encountered from the población (poor area) were so welcoming and kind. After I came back from Chile, I tried to process all that I had experienced there and I realized that I felt called to apply to the associates’ program in Latin America,” Attea said. 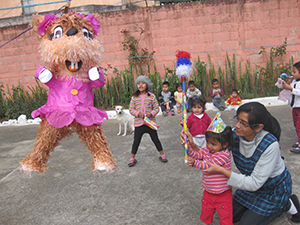 As a result of her volunteer experience with the Holy Cross Associates in Santiago, Chile from 1988 to 1990, Attea recognized a vocational desire to work in pastoral ministry.

“The values that Holy Cross nurtured in us and asked us to be really attentive to as associates and volunteers—simplicity, service, spirituality, a commitment to justice, and community life—have really stuck with me all throughout my life,” she said. “These are the types of values that I share with everyone I encounter and that I hope to pass on to my daughter.”

Looking forward to returning to Chile, Attea prepared for further ministry by receiving a master’s degree in divinity from Loyola University in Chicago. However, instead of finding herself in Chile, she next went to work for the Archdiocese of Chicago, stationed in Quechultenango, Guerrero, Mexico from 1994 to 1996.

After her time in Mexico, Attea settled in the United States within the Minneapolis/St. Paul Catholic community, working as a pastoral minister with the Hispanic Latino community.

“Although I had hoped to return to work in Chile, serving in Mexico was the best preparation I could have had for ultimately working in Latino ministry in the States,” she said.

Attea enjoyed her many years working with the Archdiocese of St. Paul & Minneapolis and the wider Minnesota faith community. But the itch to return to Latin America grew stronger as her daughter Bela, whom Attea adopted from Guatemala in 2007, got older. “Ever since my daughter could talk, she has asked about Guatemala and talked about wanting to go home.”

So, Attea started exploring different possibilities for living and serving in Guatemala with her daughter. "In the end, the opportunity to serve at El Amor de Patricia seemed like a great fit because of its strong connection to friends in Minnesota and my desire for Bela and I to have a significant immersion experience in her birth country,” Attea said. 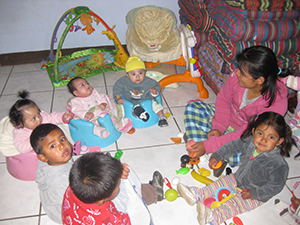 And what an experience it has been. Not only does El Amor de Patricia work to provide shelter and love for children, it also has an outreach component. With the help of donations, the home delivers bunk beds to needy children in the community and assists in revitalizing the lives of local families through educational opportunities and efforts to create better living conditions.

Caring for the children at the home, though, is the heart of its mission. The atmosphere of the home is filled with love and joy in great part due to the women and men who work there. These workers and the children they care for have taught Attea and her daughter treasured lessons in love and continue to be examples of Christian charity in their everyday work. Attea hopes she can give back to them as much as they have given to her.

“Each time I’ve gone abroad and come back, I’ve realized that a piece of my heart stays where I’ve been and some of there comes back with me,” she said. “For my daughter and I, this experience has planted valuable seeds in our hearts, some that we can’t yet identify, and it has given us an important connection to Bela’s birth country.”

Now that her yearlong commitment in Guatemala is coming to a close, Attea intends to answer the call to love and charity by returning as pastoral associate at Ascension Catholic Church in north Minneapolis.

“I often hear the comment, ‘Oh, I could never do what you’re doing,’ and my response is to encourage that person to discover what he or she could be doing right where they are with their gifts and talents. We can all do something wherever we are. There’s always a way to seek out the most vulnerable and find one’s click. Being here in Guatemala, this just happens to be mine.”