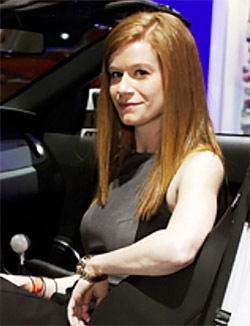 On the day Mallory McMorrow ’08 bought her first car, she spent the night in it.

It was a euphoric celebration of hard work, of saving, of relentless commitment to a goal. It’s a feeling she never wants to forget.

“I turned it into a tradition. Every time I get a new car, I sleep in it the first night because it reminds me of that first time,” McMorrow said.

This personal connection to cars is what guided McMorrow to major in industrial design in Notre Dame’s College of Arts and Letters and subsequently build a career around thoughtfully designed products and experiences.

As director of creative strategy for HēLō, a Los Angeles-based experiential production company, McMorrow utilizes all facets of her Arts and Letters degree to tell advertising stories through design, product, and style.

Best known for producing a Bud Light Super Bowl commercial in which a real man is “kidnapped” and led on a wild, nightlong adventure, HēLō aims to combine design, technology, and storytelling to form content that breaks out of the mold of traditional advertising.

Crafting an immersive experience like Bud Light’s “Up for Whatever” campaign—which included the man meeting actor Don Cheadle in an elevator and playing table tennis against Arnold Schwarzenegger—requires a host of interpersonal skills.

“It’s about listening to everybody’s input,” she said. “How do you bring all of these people with strong personalities and interesting ideas together and then turn all of that into a cohesive concept that you can pitch to an agency or a client? It’s the basis for how we bring these crazy projects to life.”

As a freshman at Notre Dame, McMorrow initially started down a traditional advertising track, but she quickly realized that a business degree was not for her.

“I started to see students a few years ahead of me who were industrial design majors,” she said. “They had these marker renderings of products that had been created by combining painting and engineering—the left-brain/right-brain thing I had been looking for.”

With this new path open before her, McMorrow began taking Arts and Letters courses, such as Figure Drawing and 3D Foundations, to help develop her product design skills. She also landed a job on campus as a digital image editor for Notre Dame’s Art Image Library (now called the Visual Resources Center).

“That was my crash course in Photoshop, because I had to take these slides—some of which were in great shape and some of which were not—and fix them,” she said. “It was a little nerve-wracking to be working on classical pieces of art and have to decide whether something was a bird or a piece of dust.” 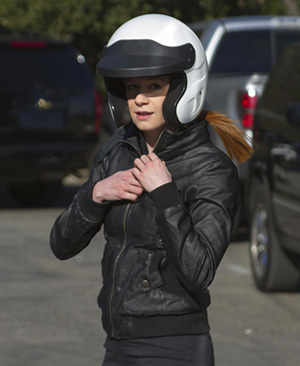 McMorrow, after exiting a vehicle on the set of the Ford Fusion Project branded content series.

McMorrow’s time in college coincided with the advent of social media. During her junior year, Mazda launched a campaign on Facebook, inviting the public to design a 2018 version of the Mazda3 compact car.

Encouraged by her design professors at Notre Dame, McMorrow entered the contest. She won—though she attributes that to more than just her design skills.

“In addition to the car sketch, the challenge required an essay. If it had just been the sketch, I would not have been in consideration at all,” she said. “For my essay, I wrote an advertising brief that sounded really exciting—something that would make you want to drive the car. I think that played a big part in my win.”

McMorrow graduated into 2008’s infamously difficult job market. Nevertheless, her stellar portfolio and her tenacity helped her get a job as a licensing coordinator at toy maker Mattel Inc. With her foot in the door, she then landed a senior design position on the iconic Hot Wheels brand.

In that role, her liberal arts fundamentals again proved invaluable when her written treatment for a live-action Hot Wheels film was selected to be included in a pitch to studio executives at Warner Bros. 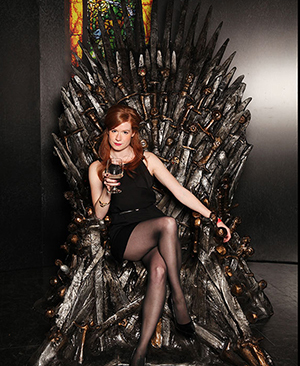 McMorrow, posing on the Iron Throne at the Season 4 premiere of the HBO series Game of Thrones in New York.

Today, McMorrow credits the skills she gained through her Arts and Letters courses for her ability to connect with people from differing backgrounds. She relies heavily on those crucial abilities in her current work at HēLō, where she is involved in endeavors like the recent Land Rover 5×5 Film Project.

McMorrow was one of five directors of experimental films shot entirely with the five cameras built into the car brand’s LR4 SUV, and she oversaw creative aspects of a live presentation at the Sundance Film Festival. That live activation won a bronze award at the Cannes Lions International Festival of Creativity.

Working with clients at HēLō and having contributed to websites such as Road & Track as an expert on design, McMorrow has fashioned her unique career through the continuous exploration of a variety of avenues.

“With Arts and Letters, you get to touch on so many different things. Take advantage of every opportunity to do extracurricular activities,” she said. “Jump around and find out what you really like and what you don’t. You need to take risks and put yourself out there.

“It’s also good to screw up—you learn so much by failing. If you play it safe and just stick with what you know, you might miss out on finding something you really love, something that celebrates what makes you great.”

At Notre Dame, McMorrow took a course called The Meaning of Things, where she learned about the emotional value people place on objects.

“The class added a whole new dimension to how I thought about product design,” she said. “Industrial design is largely about problem-solving, but there’s also that intangible X-factor that creates an emotional connection. Hopefully, you draw people in with that emotional drive, and then produce a product that functions beautifully.”

Perhaps even beautiful enough to sleep in.