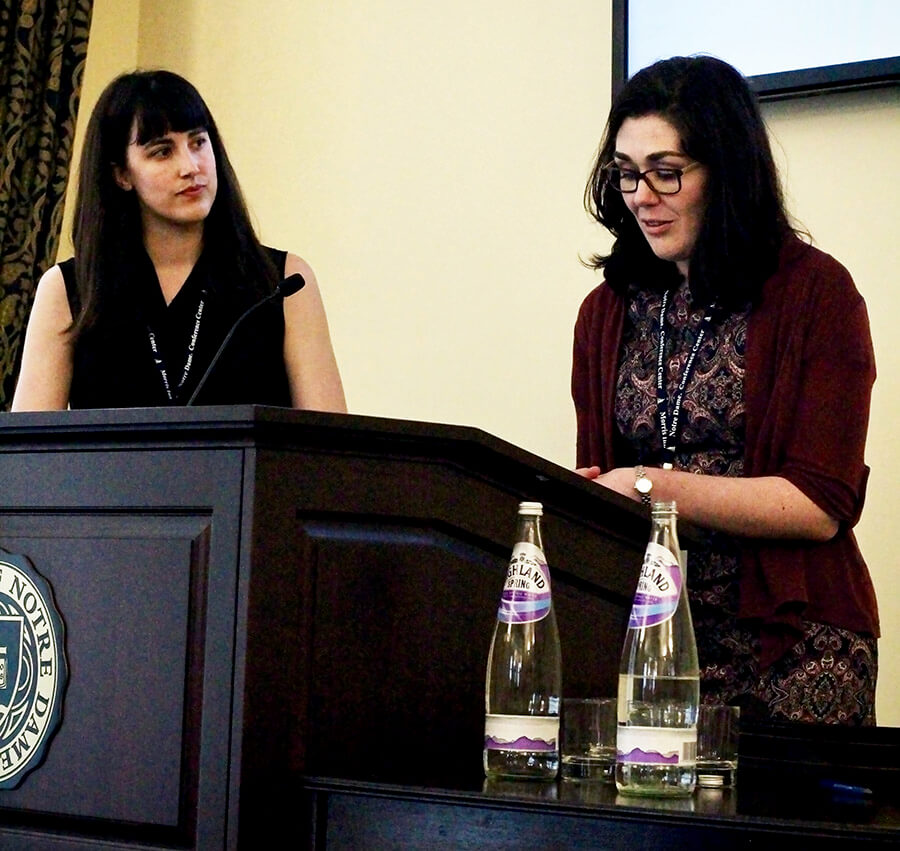 After receiving her Ph.D. in Medieval studies from Notre Dame in 2017, Megan Welton spent a year as an Arts and Letters postdoctoral fellow at the University of Notre Dame’s London Global Gateway in England. She currently is a postdoctoral researcher on the NWO-VICI project, “Citizenship Discourses in the Early Medieval World” at Utrecht University. Her research interests include late antique and early medieval political thought, the formation and manipulation of memory and rhetoric, and how these concepts impinge on early medieval queenship.

Here, she writes about the course she designed for students, her research, and how she was able to organize an international conference during her time in London.

This past academic year (2017-2018), I have had the immense privilege of acting as the inaugural Notre Dame International postdoctoral fellowship at the London Global Gateway. This meant that I lived, taught, and researched in the heart of one of the world’s best cities, filled to the brim with historical wonders around every corner.

As a postdoctoral fellow, I designed and taught my own course, Romans in Britannia and Britons in Rome: The First Millennium. This course explored the first millennium of exchange between Britannia and Rome. Even before Julius Caesar’s invasion in 55-54 BCE, Romans had explored around, battled over, and exchanged goods with the British Isles. In the centuries following, numerous embassies, royal entourages, clerics, devout pilgrims, merchants, and missionaries would make the long, sometimes treacherous journey between the British Isles and the Eternal City. The focus in this course was on exchange through religious debates, violent conflict, artistic endeavor, and mercantile profits. Students explored the ways in which classical, late antique, and early medieval authors characterized Roman generals, missionaries, and the wider culture from a number of authorial perspectives; the cultural influence of Rome upon Iron Age and Anglo-Saxon societies and vice versa in metalwork, mosaics, and burial practices; the Anglo-Saxon influx and influence in Rome and the wider Continent; and the constant traversing of the route to Rome and back by all manner of individuals.

Many of these objects — from the Iron Age Battersea Shield at the British Museum to the replica of the Gosfort cross (c.900) at the Victoria and Albert Museum — are housed in London. Furthermore, several important sites of Roman baths, Anglo-Saxon churches, and Iron Age archaeological sites are but a few hours away by train. We had the unique opportunity not only to read about the evolution of the British Isles and its constant exchange with Rome through the historical, literary, and religious texts; we also examined them in person.

At the end of the semester, students completed a major final project. They could focus their energies on a 20-page research project, by which they delved into one particular issue or set of issues, a set of texts, or an assembly of objects and through this process became experts on this particular topic. Alternatively, students had the option of a more creative project, wherein they could write a new Roman or medieval text or make a new object and, consequently, write a shorter research paper as if they — the leading archaeologist, historian, or art historian — had found that new text or object themselves. At the end of the semester, each student had to compose a 15-minute presentation before their peers, answer their peers’ in-depth questions, and incorporate these questions into the finished version of their projects.

Some students researched such varied topics as the creation of the Antonine Wall, the political agency of Empress Julia Domna, or the military strategies of Alfred Great, while others made medieval reliquaries (saintly bones included) and three-dimensional computer models of a ‘newly found’ library complex at the Roman Baths in Bath, England.

In addition to teaching my own course, I had the opportunity to co-organize a major international conference entitled, “Verbis et Exemplis: Queens, Abbesses and Other Female Rulers in Comparison, 800-1200.” From a seedling of an idea, we worked with Charlotte Parkyn, director of academic engagement, who guided us through the funding applications and, with her fantastic team, through the organizational logistics of putting on such a large event. Due to the immense generosity of the Institute for Scholarship in the Liberal Arts, Notre Dame International, the Nanovic Institute for European Studies, the Medieval Institute, and St. Andrews Institute of Mediaeval Studies, Sarah and I could invite over 20 speakers from the U.S., UK, and Europe to convene together over three days at the end of April 2018 to examine the political, religious, and ideological roles of early and high medieval queens and abbesses in comparison. The conference was filled with intellectually stimulating panels, invigorated informal conversations over tea breaks, lunches, and dinner, and boasted a robust audience filled with scholars and students alike.

Finally, I conducted manuscript research at the British Library and in the Weston Library in Oxford, while also spending much of the year composing two articles. One article, “The Memory of the Living: Political Commemorations of Allies amongst Tenth-Century Queens and Empresses,” is currently under review at a major peer-reviewed journal in medieval studies, while another on royal virtue in 10th-century liturgical practice is in the final stages of preparation. This postdoctoral year has also provided me the time and space to consider how to transform my dissertation, which conducted a comparative analysis of 10th-century queenship in Anglo-Saxon England and the Ottonian empire, into my first monograph, with serious research conducted into additional chapters.

Altogether, I have spent a remarkable year in London. Faculty, students, and staff alike, everyone at the University of Notre Dame has created a unique, and uniquely productive, environment for individual research and for collaborative exchange. I count myself as most fortunate to have been the first postdoctoral fellow at such a special campus.