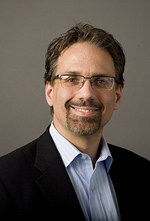 Several of Daniel Myers’ students have told him that his new course, Introduction to Peace Studies, has changed their lives, and what the young men and women are sharing in the class this semester has repeatedly moved Myers to tears.

A professor of sociology and the director of research and faculty development in Notre Dame’s Kroc Institute for International Peace Studies, Myers is teaching this class for the first time and set out to do it in a way that engages his students through their own ways of interacting with the world. Or, as he puts it, “plugs into their total `cyber-existence.’”

About a year ago Myers started blogging (maintaining or contributing to a Web log), and decided this modern form of communication could be an ideal way to grab his students’ attention and keep it focused on the class.

“It’s very useful to have blogging experience,” said Caitlyn Schneeman, a senior from St. Paul, Minn. “Even though it’s not a computer course, including this technology in a peace studies class is a great educational tactic!”

Myers also reversed the order of the class, which traditionally would begin with discussions of major wars, then progress to civil wars and smaller types of conflicts, followed by discussions of how individuals can lead a more peaceful existence. He wanted to get his students talking about little ways to promote peace in their own lives, so they would feel more connected to the bigger picture as the class progressed.

After reading Vietnamese Bhuddist monk Thich Nhat Hanh’s “Being Peace,” about how everything is inter-connected, the students started blogging.

“I asked them to try and `be peace’ in some small way every week and then blog about it,” Myers explained. “I told them to go by their own definitions of peace, because I didn’t want to push anyone into an ideological position or cause they don’t believe in.”

The students now are having their discussions on-line at http://www.ndpeaceblog.blogspot.com/ , and Myers is stunned by what he’s read so far.

“I never imagined how well it would work,” he said. “It’s amazing what’s happening. First of all, they are doing seriously challenging things that are important in their own lives, and some of them are really gripping. I’ve cried every week I’ve read these blogs. They are unbelievable.”

Schneeman, who has had a strained relationship with her mother, sent her a letter in an attempt to reconcile. She also penned letters to her senators urging them to support the DREAM Act (proposed immigration legislation), offered a loan to an impoverished woman farmer in Nigeria through kiva.org and distributed inspirational peace quotes to her classmates.

“Some of the things I do for the peace blog are things I’ve wanted to do for awhile but never motivated myself to do,” Schneeman said. “This is empowering and fun. Professor Myers has encouraged us to move beyond the limits of theory and live what we believe.”

Another woman who recently developed a close friendship with a gay man is working to break down a barrier that has developed as a result with her father. Other students are confronting racist jokes and performing random acts of kindness.

“I saw an elderly woman gazing at the dome from a bench,” blogged a young man who uses the pseudonym `sailor.’ “I decided to go over and say hello…just to give her a smile. She was waiting for her granddaughter to get out of class and had managed to get lost. I led her back to her meeting place where we met her granddaughter…her very, very attractive law school granddaughter. Who said doing something nice has to be painful?”

Katherine Mastrucci, a sophomore from Miami, has completed her assigned blogs, but has no intention of stopping.

“It really has changed my life,” she said. “It forced me to do what normally I would not have had the courage to do, like helping complete strangers, reconciling strained friendships and simply restoring a little peace to my own life. Now, it’s not about the grade. I’m still doing this for the inner peace, personal satisfaction and empowerment that peace building brings. We all have the power to change the world.”

The recipient of the College of Arts and Letters’ 2007 Sheedy Award for excellence in teaching, Myers says he strives for a holistic, integrated learning experience for his students and says he definitely plans to revisit the peace blog in future classes.

“It really has tied everything together,” he said, “their readings, their experiences in real life, issues with their families and people who are important to them, conflicts with friends and roommates -the kind of stuff that’s critical to their development as people while they are students. It’s all coming together through the peace blog. It’s mind-blowing, really. I never had any idea it was going to be this powerful.”

As his students commit to saying daily prayers for peace at the Grotto, discover through volunteering that people who have done bad things are not necessarily bad people, make the tough decision to dissolve a friendship for the sake of peace, seek out ways to help displaced children in Uganda, and work to let go of their grudges, Myers realizes: “This really is one of the best experiments I’ve ever done as a teacher.”